HomeSeasonal StrategiesSeptember 2020 Outlook: Ripe for a Brief Pause during the March Higher

September 2020 Outlook: Ripe for a Brief Pause during the March Higher

Reflecting on this historic and crazy year from the breezy climes on the southern end of Long Beach Island, New Jersey we are encouraged by the tale of the tape and the stance of monetary policy and fiscal stimulus. Two old market postulates are currently at play: “Don’t fight the tape,” and “Don’t fight the Fed.” In addition we have massive, unprecedented fiscal stimulus with little place to go but into the stock market, particularly U.S. stocks. The Fed’s new approach to inflation and their already firm stance to keep rates near zero for the foreseeable future indicate the bears will be hard-pressed to survive.

And now election forces have finally begun impacting the market again after they were usurped by the pandemic. Regardless of who wins the election the current administration is still priming the pump as all incumbent administrations have done since time immemorial. This is what creates the 4-year cycle. Here in Covid-time the White House has been making deals and pumping money into any and all tests, treatments and vaccines for Covid.

There is still a bit of dichotomy between NASDAQ, S&P 500, DJIA and the small-cap Russell 2000 index. On the back of the new work-from-home economy and the biotech/pharma push to combat this virus NASDAQ stocks have been strongest and first to blow out the old highs in June and have led the market higher through this whole pandemic quarantine fiasco. S&P has just cleared its high-water mark in August. DJIA flirted with being positive for the year on Friday, August 28, 2020 before falling back on the 31st. New changes to the Dow are likely to make it easier for the blue-chip benchmark to reach new highs. The Russell 2000 continues to lag.

Technical resistance is all but destroyed and the market is on a path higher fueled by massive stimulus, ultra-low interest rates and infinitely accommodative monetary policy. Sentiment is high but that can persist for months before the market corrects. Market breadth and valuations are concerning as is September’s infamous history of declines, even in election years.

It will be instructive to see how the market reacts to the conclusion of the Republican National Convention over the next several days and weeks. Any signs of weakness or concern that the incumbent is not going to win in November will put pressure on the market to pullback in September. But if the market rallies around the president and we continue to corral this pandemic we don’t expect much of a pullback.

If things continue to move back toward normal as they appear to be doing here “down-the-shore” as well as back home in Rockland County and at the office in Westchester in what was once on the outskirts of ground zero for the pandemic in the U.S., the economy will rebuild and reshape itself into a new more efficient organism fueled on lower labor costs, Fed Kool-Aid, fiscal stimulus and technological productivity growth no matter who wins the election.

2021 is a different story. A new administration is more likely to make major economic changes that would take some time for the market to adjust to and the market would likely be weaker as it acclimates to the different circumstances. But for now it looks like the market and economy will remain in recovery mode for the rest of 2020 with the potential for a pullback highest in September and leading up to this likely contentious election.

Our updated chart of election years tracking 2020 S&P 500 performance versus all election years and incumbent party wins and losses – as well as the polls – suggests that President Trump’s reelection is not a forgone conclusion. Recent polls indicate the race has gotten quite tight. The S&P 500 is still tracking the red incumbent-loss trend more closely, but is closing in on the on the average election year trend in the blue line.

The red incumbent loss line shows the market beginning to pullback in early September, so any weakness could be an indication the market is anticipating a change in power in Washington DC and that stocks will be impacted adversely. If the market continues higher uninterrupted it is more likely the Trump Administration will be reelected to another term. This is a critical time for the market and the election and how the market behaves over the next two months will be the best poll we know of to gauge who may win the White House in November. 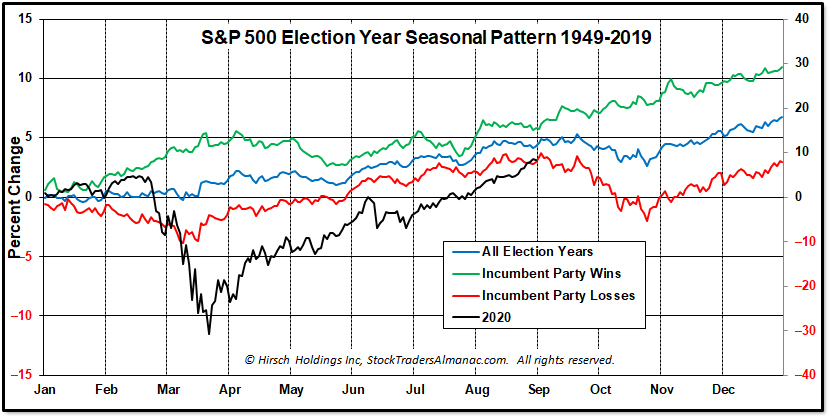