Midterm years are notoriously a rough year for markets as presidents push through their most disruptive policy initiatives and battle the opposition party to retain congressional seats. But the last three midterm years, 2006, 2010 and 2014 have been strong followed by troubled pre-election years. 2007 brought us the major top of the Financial Crisis with the S&P up 3.5%. 2011 suffered a mini-bear from April to October that shaved 19.4% off the S&P, which ended the year down a fraction -0.003%. Another mini-bear transpired in 2015 with the S&P losing 14.2% from May 2015 to February 2016. The S&P finished 2015 off -0.7% for the year.

From the chart below comparing 2018 to the previous three midterm years 2006, 2010 and 2014, it looks like we are setting up for above average midterm year market gains again followed by a weaker pre-election year prone to a bear market and a recession. Encircled in yellow, all four years suffered early-year declines in January/February. Looking forward from here the previous three midterm years had pullbacks that ended in July or August or September/October as was the case in 2014. 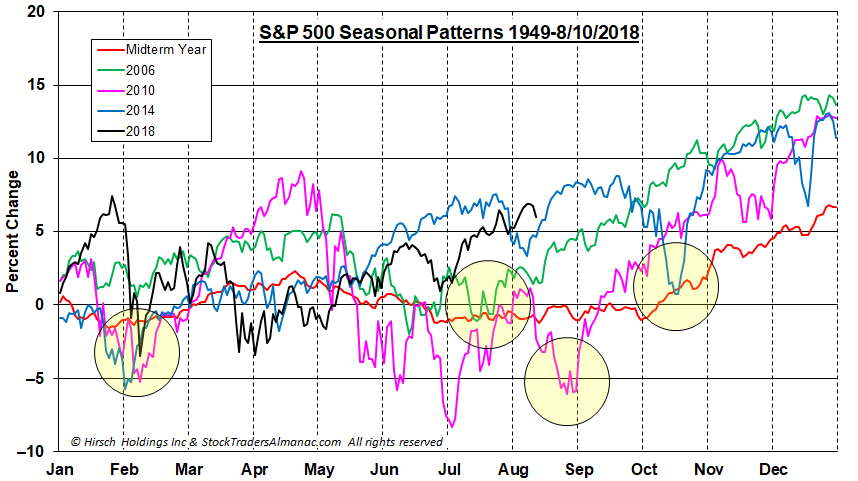 Contagion from the economic, currency and political crisis in Turkey has not spread as of yet, but we are reminded of the 1997-98 currency crisis that started with the Thai baht meltdown in July 1997 and then spilled over into other Asian currencies in the fall of 1997. But it wasn’t until August 1998 when additional pressure from the Russian financial crisis caused the collapse of hedge fund behemoth Long Term Capital Management that had to be bailed out by Wall Street banks under the supervision of the Federal Reserve to prevent a deeper crisis.

Earnings season is winding down and has been well above estimates, again. This has buoyed the market, but the advance/decline lines are not robust, and traders and investors are complacent. VIX is back down under 14 today. Investors Intelligence Advisors Sentiment has bulls back up to 57.3% vs. 18.4% bears, pushing the spread close to the danger zone. Weekly CBOE Equity-Only Put/Call ratio remains sanguine at 0.64.

This sets up the market for possible retracement of recent gains. But without a meaningful retreat or pullback, the Q4 rally could be muted and make us more vulnerable to an early 2019 top. Earnings comparisons will be much more challenging next year and tax cut and fiscal stimulus effects will begin to fade.

The wall of worry is not that tall. There is not much left to climb. Nothing negative has yet to stick to this White House and now it is reported that China is coming to visit later this month for renewed trade talks. China seems to be in trouble with the tariffs, the yuan has been slipping and the Shanghai composite is down 18.2% YTD.

The bottom line right now, whether you like it or not, is that President Trump’s “Art of the Deal” policies are trumping bearish seasonality. Everyone has been on the weak August seasonality bandwagon for some time and that trade is a little too crowded right now for any bear to emerge.