HomeSeasonal StrategiesMarket Outlook May 2019: Market Prone to Short-Term Weakness in May

Market Outlook May 2019: Market Prone to Short-Term Weakness in May

After a rough start to the “Best Six Months” with the market falling precipitously in November-December the recovery rally has put DJIA up 5.9%, S&P 500 up 8.6% and NASDAQ up 10.8% for the Best Six Months November-April from the October 31, 2018 close to the April 30, 2019 close. The history of the Best Six/Worst Six Months is impressive, though there have been off periods throughout its history. But now as the Best Six Months has come to a close at the end of April and the dreaded “Sell in May and go away” mantra is now being chanted on The Street, our strategy becomes more cautious.

Our overall outlook for the year remains bullish as it has been since our Annual Forecast in December that was followed by a bullish January Indicator Trifecta. The historical strength of Pre-Election Years, which has been self-evident thus far this year, is supported by resilient economic and corporate readings, a dovish Fed clearly done with raising interest rates for the time being and a White House that is supportive of Wall Street. But, as you can see in the chart of Pre-Election Year Seasonal Patterns below, the Dow (black dotted line) and S&P (green dotted line) are already quite close to historical average gains for the Pre-Election year and NASDAQ is way ahead of the pace up more than 20% for 2019 to date.

Ostensibly, the S&P and NASDAQ are on the brink of clearing the last levels of resistance. But the Dow is struggling to make a new high. S&P and NASDAQ made new all-time highs in April, but are straining to hold those levels and there is chatter in technical analysis circles about a bearish double top forming on the S&P and NASDAQ. Also evident in the chart here is the weakness often experienced in the latter part of May. So while we remain bullish on the year, we do expect the market to be weaker during the mid-May soft patch and backing and filing during the Worst 4 Months July-October. 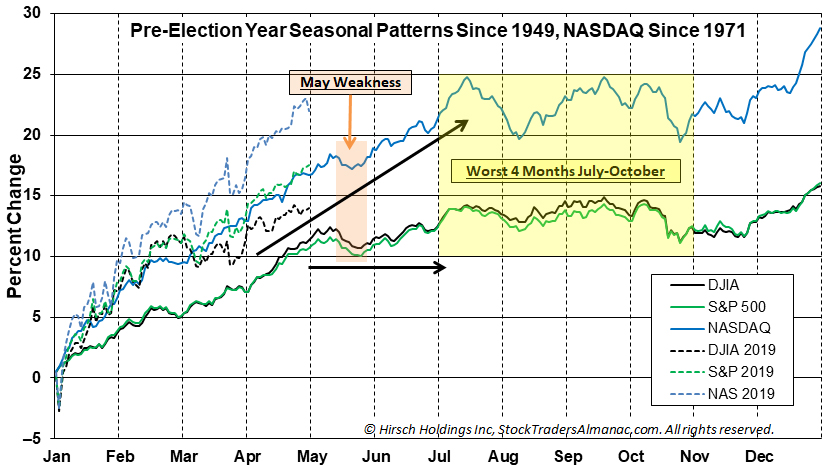