It is the season for rallies, but not the Santa Claus Rally quite yet. As I reiterated once again earlier this week on my blog, the Santa Claus Rally is not any seasonal rally in the fourth quarter of the year or around yearend, it is the usual short, sweet, respectable rally Santa brings to Wall Street within the last five days of the year and the first two in January.

The Santa Claus Rally was discovered and named by Yale Hirsch in 1972 and published in our 1973 Stock Trader’s Almanac. The Santa Claus Rally is not really a trading strategy it is an indicator, the first of our January Indicator Trifecta (more on that next month). Santa’s failure to show tends to precede bear markets, or times stocks could be purchased later in the year at much lower prices. To Wit, “If Santa Claus Should Fail To Call, Bears May Come To Broad and Wall.”

Santa Claus may not be coming to town until the end of December, but there is still plenty of market upside to be had seasonally and historically at present. Our good friend and options guru Larry McMillan enjoys a seasonal trade as well and has combined post-Thanksgiving bullishness, the “January Effect” of small cap stocks outperforming big cap stocks that now takes place in mid-December (pages 108 & 110 of the 2018 or 2019 Stock Trader’s Almanac.) with our Santa Claus Rally and goes long the Russell 2000 index of small cap stocks from the day before Thanksgiving through the second trading day of the New Year.

So I ran the numbers on that timeframe for the Dow, S&P 500, NASDAQ Composite and Russell 2000. As you can see in the table below small caps clearly outperform large caps over this period with an 82.1% win ratio and average gains of 3.4% since inception in 1979. The big caps and NASDAQ don’t do too shabby either. The Dow and S&P log near an 80% win ratio with average gains around 2.5% since 1950 and NASDAQ has a 74.5% winning percentage with average gains if 2.85% since 1971 though median gains are 2.15%, reflecting some outsized gains over the years.

The rest of December’s market stocking is also stuffed rather full, but the first half of the month is usually weaker than the second half as tax loss selling dominates trading. As mentioned above small caps tend to begin to outpace large caps around mid-December and then we serve up Wall Street’s only “Free Lunch” just before Christmas (Almanac page 112).

Since our most recent bout of “Octoberphobia” that reaffirmed “Sell in May” is not dead, the market has been attempting to rally, albeit in fits and starts. We have been saying for months, especially in our “Market at a Glance,” that the Fed is the biggest risk to the market and the economy and now Chairman Powell’s kind words the last week of November sent the market soaring back.

But there is still work to do and risks abound. Yes, we are still bullish on the “Sweet Spot” of the 4-Year Cycle from Q4 in the midterm year through Q2 of the pre-election year (Q4 2018-Q2 2019), but we are concerned after that and will layout our full Annual Forecast for 2019 in the later part of December.

Finally, technically speaking we are tracing out a potential “W-1-2-3 Swing Bottom” pattern as shown in the graph below. If we can clear the midpoint of the “W” at point 2 in the chart, at the early November highs, that would be constructive for the market to move to new highs. Once we clear that level, it becomes support and if breached again to the downside it would be concerning. The rising trend from point 1 to point 3 in the graph is also encouraging. 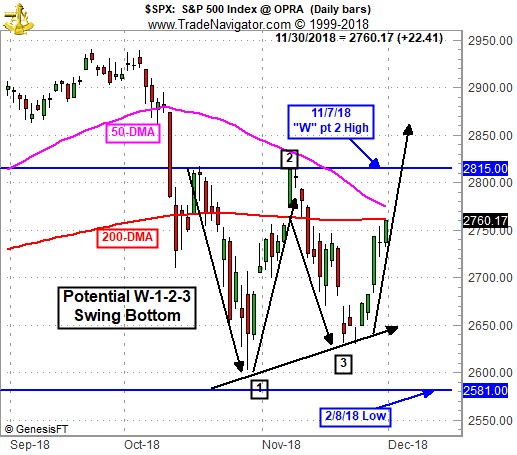