Seasonal patterns continue to reassert themselves and that is positive for the probability of new highs by yearend. Typical September and early October weakness created a solid set up for our October 8 Seasonal MACD Buy Signal. Then late-October seasonal strength carried into early November before the usual pre-Thanksgiving weakness ensued. As we head into December, the market is trying to find its footing and we look for the market to shake off its current funk as it usually does and rally into the year-end holiday buying spirt.

As the S&P 500 is up rather impressively, 24.9% year-to-date this year through the close on the Tuesday before Thanksgiving, we ran the numbers on the 33 previous years with double digit year-to-date gains at this juncture since 1950. There are a few blemishes, but in general market gains continued into yearend.

Most importantly, there are no major selloffs on this list. The big December decline of -9.2% in 2018 came after the S&P 500 was down -1.2% at this point in the year. After double-digit YTD gains the S&P 500 was up 70% of the time from the Tuesday before Thanksgiving to yearend for an average gain of 2.3%. 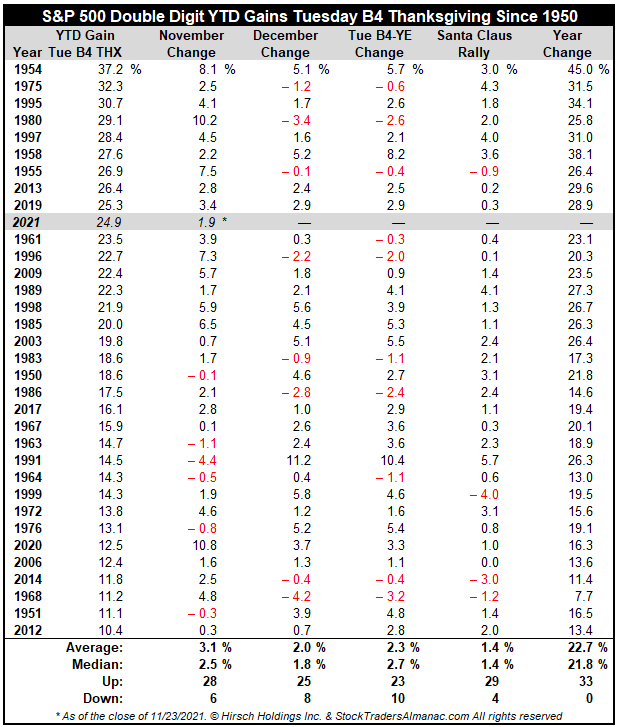 December typically starts out weak as tax-loss selling ramps up and with the big gains this year we believe that early December weakness is likely to materialize. Then as you can see in the typical December chart here stocks usually begin to takeoff around mid-month led by small caps and the Russell 2000. 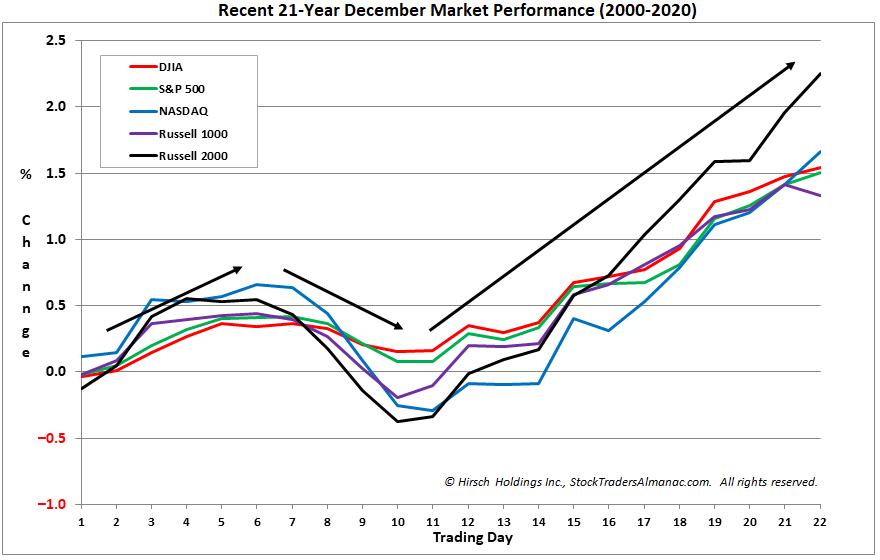 The Santa Claus Rally was defined by Yale Hirsch in 1972 as the last five trading days of the year and the first two trading days of the New Year. This short, sweet rally is usually good for about 1.3% on the S&P 500, but as we alluded to before the real significance of the SCR is as an indicator.

It is our first seasonal indicator of the year ahead. Years when there was no Santa Claus Rally tended to precede bear markets or times when stocks hit significantly lower prices later in the year. We get an even better indication of the New Year when we combine SCR with the First Five Days Early Warning System (2021 Almanac page 14, 2022 page 16) and the full-month January Barometer reading. We call this the “January Indicator Trifecta.”

Our outlook remains bullish for the remainder of 2021 and as long as Covid cases don’t explode again and many places go on lockdown or ramp up restrictions majorly, new highs are likely before yearend and we would not be surprised to see the S&P 500 encroach upon the big round number of 5000. 2022 will likely be a different case and we will address that thoroughly in our 2022 Annual Forecast next month.