October often evokes fear on Wall Street as memories are stirred of crashes in 1929, 1987, the 554-point drop on October 27, 1997, back-to-back massacres in 1978 and 1979, Friday the 13th in 1989 and the 733-point drop on October 15, 2008. During the week ending October 10, 2008, Dow lost 1,874.19 points (18.2%), the worst weekly decline in our database going back to 1901, in percentage terms. March 2020 now holds the dubious honor of producing the worst, second and third worst DJIA weekly point declines. The term “Octoberphobia” has been used to describe the phenomenon of major market drops occurring during the month. Market calamities can become a self-fulfilling prophecy, so stay on the lookout and don’t get whipsawed if it happens.

Election-year Octobers rank dead last for Dow, S&P 500 (since 1952), NASDAQ (since 1972), and Russell 2000 (since 1980). Eliminating gruesome 2008 from the calculation provides a moderate amount of relief, as rankings climb to mid-pack. Should a meaningful decline materialize in October it might present a buying opportunity, especially for any depressed technology and small-cap shares.

Another interesting aspect of election-year Octobers is the propensity for S&P 500 gains when the incumbent party ultimately retains the White House. Of the ten incumbent victories since 1944, the S&P 500 has advanced seven times, declined twice, and was unchanged in 1944 with an average October gain of 1.4%. Of the nine occurrences since 1944 when the incumbent was defeated, there were six S&P 500 declines and three advances in October. The average October decline when incumbents were defeated was 2.1%. Even excluding the S&P’s 16.9% plunge in 2008, incumbent defeats were still preceded by an average October loss of 0.3%. 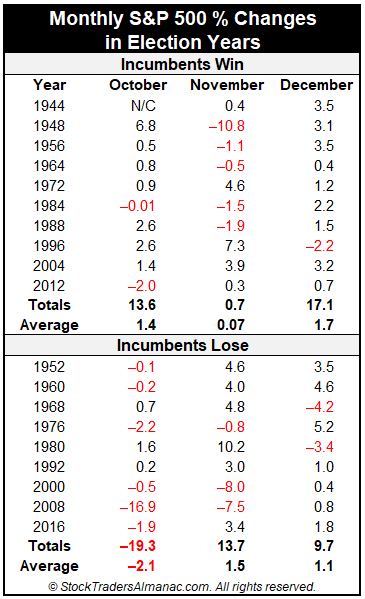 Options expiration week in October provides plenty of opportunity. On the Monday before expiration the DJIA has only been down ten times since 1980 and the Russell 2000 is up twenty-two of the last thirty years, seventeen straight from 1990 to 2006. Expiration day has a spotty record as does the week as a whole. After a market bottom in October, the week after is most bullish, otherwise it is susceptible to downdrafts.

October is also the end of the Dow and S&P 500 “Worst 6 Months” and NASDAQ “Worst 4 Months”. Remain attentive for our Seasonal Buy Signal that can occur anytime beginning October 1. 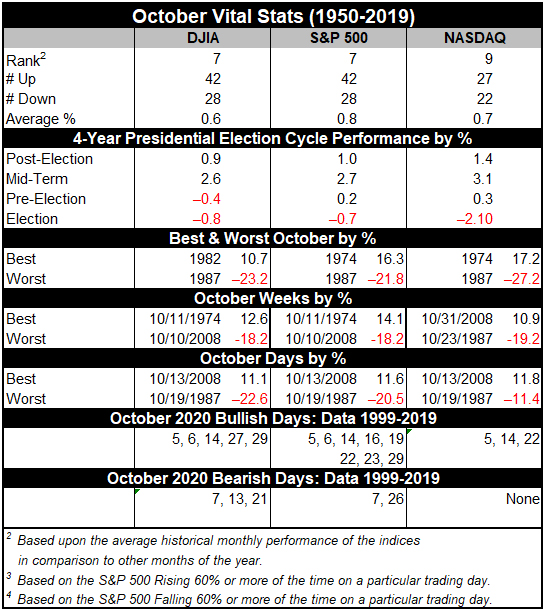