November is still maintaining its status among the top performing months as fourth-quarter cash inflows from institutions drive November to lead the best consecutive three-month span November-January. However, the month has taken hits during bear markets and November 2000, down –22.9% (undecided election and a nascent bear), was NASDAQ’s second worst month on record—only October 1987 was worse.

Being a bullish month November has four bullish days, though it does have weak points. NASDAQ and Russell 2000 exhibit the greatest strength at the beginning and end of November. Historically, Russell 2000 is notably bearish on the 12th trading day of the month; the small-cap benchmark has risen just eight times in the last 36 years (since 1984). The Russell 2000’s average decline is 0.39% on the day. Recent weakness around Thanksgiving has shifted DJIA and S&P 500 strength to mirror that of NASDAQ and Russell 2000 with the majority of bullish days at the beginning and end of the month. We believe the best way to trade Thanksgiving is to go long into weakness the week before the holiday and exit into strength just before or after. 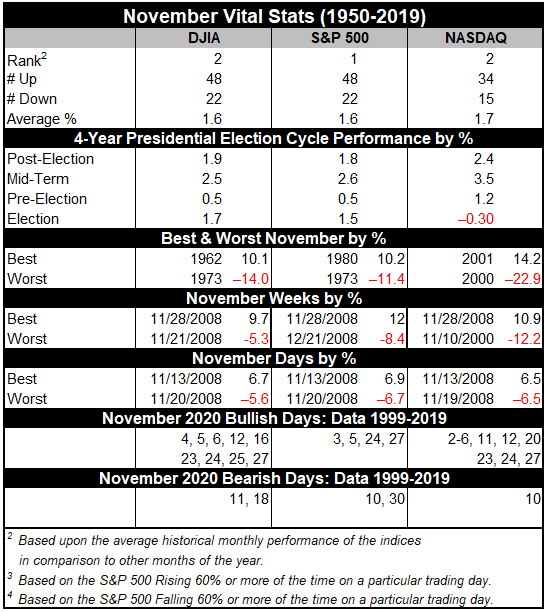