May has been a tricky month over the years, a well-deserved reputation following the May 6, 2010 “flash crash”. It used to be part of what we called the “May/June disaster area.” From 1965 to 1984 the S&P 500 was down during May fifteen out of twenty times. Then from 1985 through 1997 May was the best month, gaining ground every single year (13 straight gains) on the S&P, up 3.3% on average with the DJIA falling once and two NASDAQ losses. 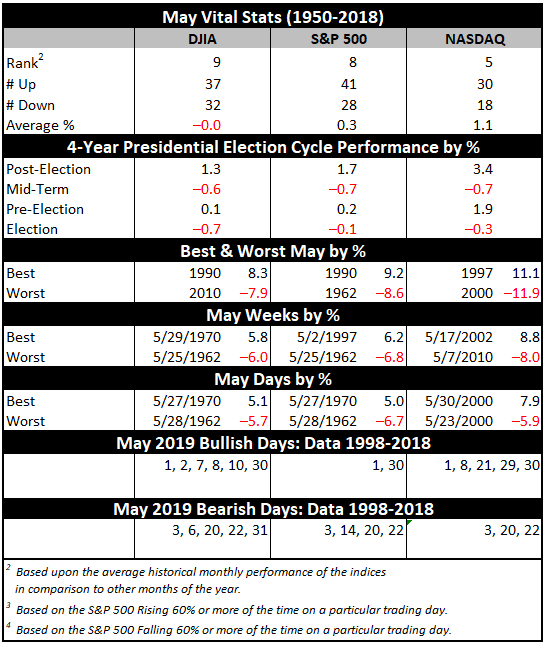 Based upon the S&P 500, Monday before May option expiration is much stronger than expiration day itself. S&P 500 has registered only seven losses in the last thirty-one years on Monday. Expiration day is a loser nearly across the board. The full week had a bullish bias that has been fading in recent years. The week after options expiration week now favors NASDAQ. DJIA has fallen in eleven of the last twenty weeks after, while NASDAQ has been up in eleven of the last fifteen weeks after.

On Friday before Mother’s Day the DJIA has gained ground sixteen of the last twenty-four years and on the Monday after (the first day of options expiration this year), the blue-chip average has also risen in seventeen of those years.

The first two days of May trade higher frequently and the S&P 500 has been up 21 of the last 29 first trading days. A bout of weakness often appears on the third, fourth and around the fifteenth trading day for large cap stocks. Generally, the first half of the month is better than the second half.