July historically is the best performing month of the third quarter however, the mostly negative results in August and September tend to make the comparison easy. Two “hot” Julys in 2009 and 2010 where DJIA and S&P 500 both gained greater than 6% and strong performances in 2013 and 2018 have boosted July’s average gains since 1950 to 1.3% and 1.1% respectively. Such strength inevitability stirs talk of a “summer rally”, but beware the hype, as it has historically been the weakest rally of all seasons (page 74, Stock Trader’s Almanac 2021).

July begins NASDAQ’s worst four months and is the fifth weakest performing NASDAQ month since 1971, posting a 0.6% average gain. Dynamic trading often accompanies the first full month of summer as the beginning of the second half of the year brings an inflow of new capital. This creates a bullish beginning, a soft week after options expiration and some strength towards the end.

Post-election year Julys rank at or near the top of all post-election year months. DJIA, S&P 500, and NASDAQ are ranked #1. Russell 2000 ranks #2. Delving deeper into this data revealed that many of these past “hot” Julys were preceded by a flat or down first half of the year so there is no guarantee that this July will live up to its historical post-election year record again this year. 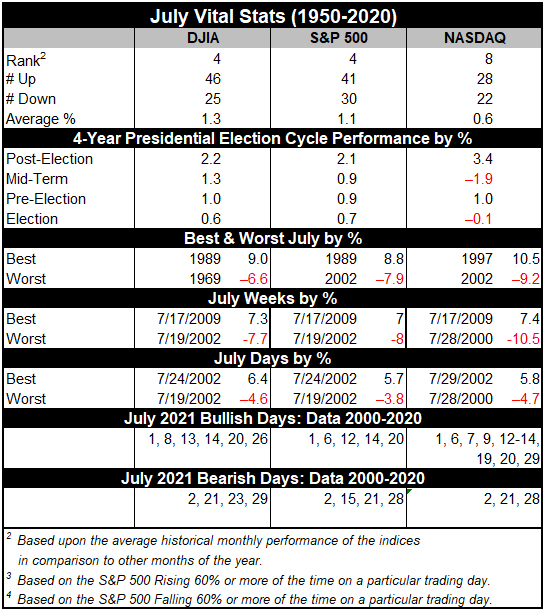