Almanac Update January 2018: Results from Trio of Indicators Could Reshape 2018

January has quite a legendary reputation on Wall Street as an influx of cash from yearend bonuses and annual allocations typically propels stocks higher. January ranks #1 for NASDAQ (since 1971), but sixth on the S&P 500 and DJIA since 1950. It is the end of the best three-month span and possesses a full docket of indicators and seasonalities.

In midterm years, January ranks near the bottom since 1950. Large-caps have been the worst with S&P 500 and Russell 1000 ranking #11 (second worst) and DJIA #10. Technology and small-cap shares fare slightly better in the rankings, but average performance is still negative. 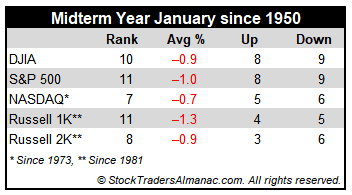 On pages 106 and 110 of the Stock Trader’s Almanac 2018 we illustrate that the January Effect, where small caps begin to outperform large caps, actually starts in mid-December. The majority of small-cap outperformance is normally done by mid-February, but strength can last until mid-May when most indices reach a seasonal high.

The first indicator to register a reading in January is the Santa Claus Rally. The seven-trading day period begins on the open on December 22 and ends with the close of trading on January 3. Normally, the S&P 500 posts an average gain of 1.3%. The failure of stocks to rally during this time tends to precede bear markets or times when stocks could be purchased at lower prices later in the year.

On January 8, our First Five Days “Early Warning” System will be in. In post-presidential election years this indicator has a solid record. In the last 17 midterm election years, just 8 full years followed the direction of the First Five Days. The full-month January Barometer has a midterm-election-year record of 10 of the last 17 full years following January’s direction. 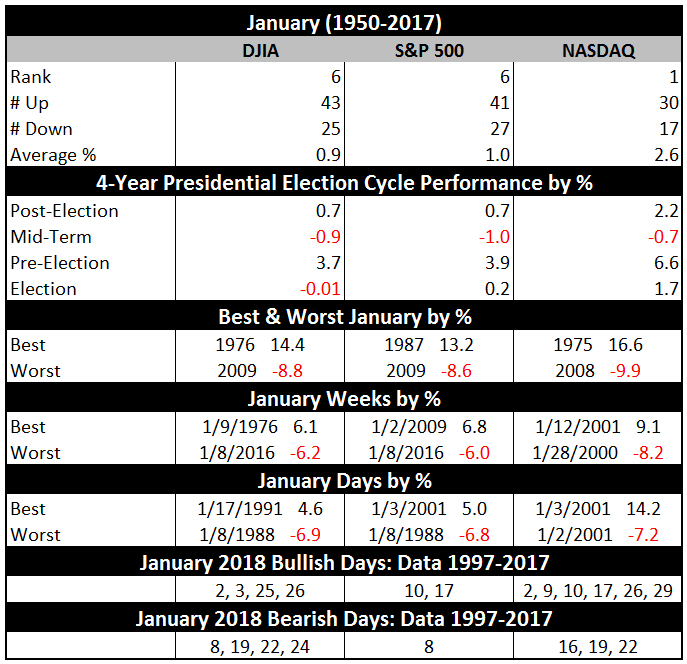