So “Sell in May” Didn’t Work This Year?

The market’s rise from May through September was impressive, but folks forgot about October. NASDAQ just made its lowest close since May. And from our NASDAQ Best Eight Months Seasonal Sell Sign on June 21, 2018 at 7712.95 it’s down 5.0% at yesterday’s close.

The past two days have reminded everyone of October’s frightful history of crashes, corrections and market calamities. Our October Almanac points out that October is the best midterm month, but we also warned of October’s scary record.

“The term “Octoberphobia” has been used to describe the phenomenon of major market drops occurring during the month. Market calamities can become a self-fulfilling prophecy, so stay on the lookout and don’t get whipsawed if it happens…. This year is a midterm year, but the market has been resilient thus far during the Worst Months which may temper full-month October results.”

October isn’t over yet, it could still be up solidly after another fast correction, which would likely also give us a sweet Seasonal MACD Buy Signal. Sell in May is not dead, but let’s not count our gains or corrections before they are fully hatched. The Worst Six Months May-October (AKA Sell in May) are not over. Q4 2018 is not over either, in fact it’s only just begun. So there is plenty of time for the 4th quarter rally to materialize as well as the “Sweet Spot” of the 4-year cycle we have spoken a great deal about lately.

In all likelihood, the correction has a bit more to go, perhaps as deep as the correction in Q1 this year. Remember all the talk about how long we went without a 10% correction? Well welcome to a little mean reversion. That goes double for all the conjecture that Sell in May has not been working the past 5 years. NASDAQ B8M has. But nevertheless 5 years is not a cycle or statistically significant. Nine years is a little short, but the great recession low of March 2009 was a significant moment and as noted in the table below the BSM has outperformed the WSM, by a considerable margin since 2009 with more gains from NASDAQ’s Best 8 Months.

In all likelihood, the correction has a bit more to go until folks start asking out loud “should I sell?” And that should set up our Best Months Seasonal Buy Signal nicely. 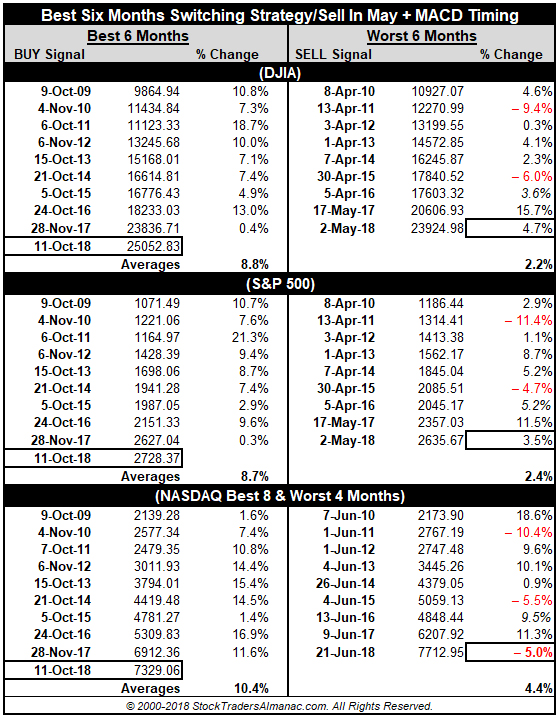