September 2022 Outlook: Not Out of the Woods Yet

While the folks at the Fed convened their annual symposium in late August at Jackson Lake Lodge in the Wyoming wilderness fishing for answers on the economy and its next policy moves Jeff retreated to the woods and beaches in Ogunquit, Maine. He did not come across any bears on the morning hikes along the Ogunquit River, but the level of tourist activity there was suspiciously slow.

Maine’s popular southern coast is not dead, but the crowds were smaller, wait times at happening restaurants were short and beach parking spots were not too hard to come by. But the lobstah was still wicked good and the surfing was still consistently ridable. The scene up there this year seems emblematic of the economic situation in the U.S. – tepid and slower than usual, but not collapsing.

The summer rally so far has been impressive, but the Fed and particularly Chairman Powell made it painfully clear we are not out of the woods yet. The major averages have stalled at their respective 200-day moving averages, a key technical level, and are now testing new short-term support around the June highs and the 50-day moving averages. Market internals are still not convincingly bullish. Back-to-back Down Friday/Down Mondays with the biggest losses since June on Monday 8/22 and Friday 8/26 is also a warning sign.

The second estimate of Q2 GDP was revised a little higher though still negative from –0.9% to –0.6%. Atlanta Fed’s GDPNow latest estimate for Q3 has been revised lower to 1.6% last week from the high of 2.5% mid-August. Sentiment improved throughout the summer rally, but where the market moves next is really all about inflation and the Fed.

With history as our guide and current readings tame, we are inclined to heed the seasonal cautions that surround worst-month-of-the-year September and the Weak Spot of the 4-year cycle. We also still have the battles of the midterms, end of Q3 quarterly reshuffling pressures and October-phobia to contend with.

As you can see in our brand-new Stock Trader’s Almanac Aggregate Cycle index (STAAC) the seasonals and cycles point to a continued pullback into the end of September. STA Aggregate Cycle is a combination of the 1-Year Seasonal Pattern for All Years, the 4-Year Presidential Election Cycle and the Decennial Cycle. In the chart here STAAC is all years, midterm years and second years of decades post-WWII from 1946-2021. 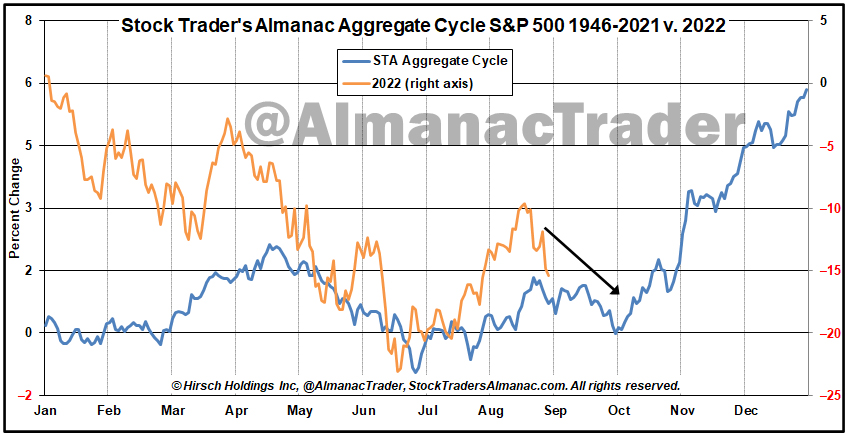 Should the next readings on inflation not show continued abatement and should the Fed’s statements over the next several weeks and in the next FOMC policy release continue to be more hawkish than The Street has been pricing into the summer rally we believe we could take out the June lows.

The more likely scenario from our vantage point is for a retest of the June lows with a slightly higher low at some point in September or October. Then we look for a new cyclical bull market to gather momentum in the Sweet Spot of the 4-year cycle from Q4 midterm year to Q2 pre-election year.

So, while we await to hear what the Fed has to say and see what they do with rates at the next FOMC meeting on September 21 (A meeting associated with a Summary of Economic Projections) and for the next inflation readings (CPI on September 13 and PPI September 14) we are going to stick to our system and seasonal strategy and wait for better bullish signals and the Sweet Spot of the 4-Year Cycle.