We coined the term “bear-killer” for October way back in 1968 in the 1969 Stock Trader’s Almanac, the second edition. The original theory from the 1969 Almanac still holds water.

October has been the big bargain month of the post-World War II era. Its chief asset is its enviable position in the calendar. It falls in front of the most bullish three-month span of the year (November, December and January). At this time, volume picks up considerably and there is a great seasonal demand for stocks.

Amazing how little this has changed in 54 years despite the many systemic changes to the market, technological advances and shifts in collective human behavior and behavioral finance. The negative seasonality in September and volatility in October that creates “Octoberphobia” and turned October into a “bear-killer” comes from fund tax selling, end of Q3 window dressing and portfolio restructuring. 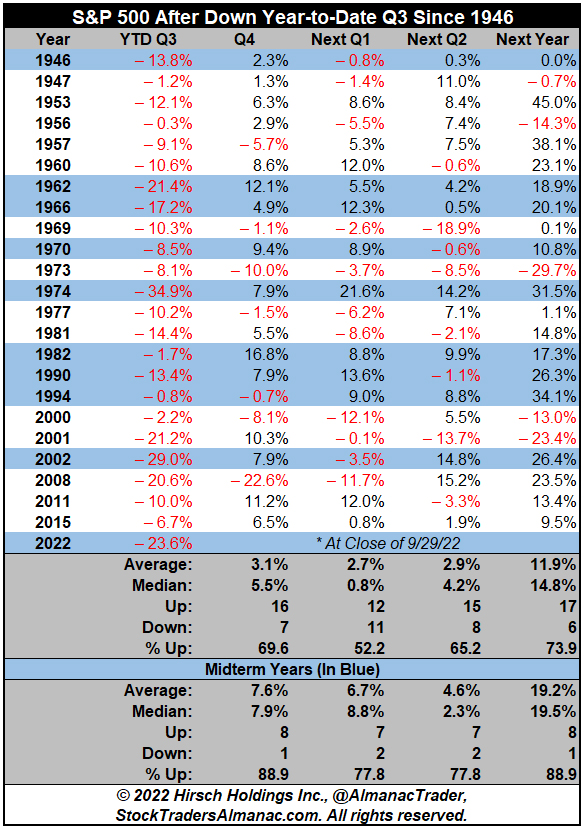 So, while things look grim out there on Wall Street, economically and globally, odds are we are nearing a bottom and the prospects for Q4 and next year are encouraging, at least historically, seasonally and 4-year cycle-wise. But there is still a lot that needs to go right, and the market likely has further downside left.

We have shared several analog charts to 2022 this year, but the one that stands out to us now after taking out the June lows on DJIA and S&P 500 is the New Democratic President Midterm Year analog. The chart suggests that after a bit of a rebound in mid-October the market will make a lower low at the midterm bear market bottom toward the end of October. 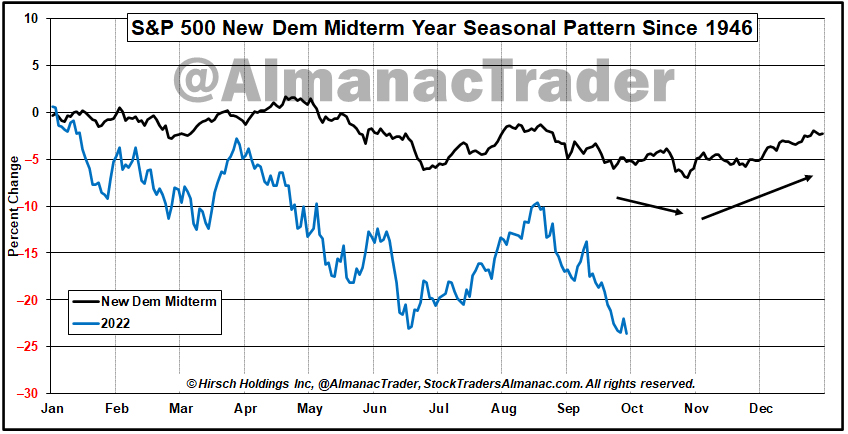 While we are all anxious for this bear to run its course and for the next Stock Trader’s Almanac Best Months Seasonal MACD Buy Signal, patience and prudence is in order. As September delivered on its historic weakness October promises to present its usual volatility. The Stock Trader’s Almanac MACD Buy Signal has come as early as October 1, though that does not appear likely this year, and as late as mid-December.