Despite the selloff on the last day of April, the Best Six Months ended on a positive note, registering the best month in decades and the best April since the Great Depression. We have been tracking our Seasonal Best Six Months MACD Sell Signal for DJIA and S&P 500 since April 1. The slower MACD Sell indicator turned positive March 26 and remains in an uptrend and has not issued a new sell signal yet. At this point it would still take a one-day drop of 10% to trigger.

The massive rally has surely been impressive and a welcome change from the carnage we experienced in February and March. April 2020 has been the best month since January 1987 for DJIA and S&P 500 and the best April since 1938. January 1987 was several months before the August top and October crash. April 1938 came right on the heels of the March 31, 1938 bear market low.

But April’s huge move was still not enough to put the Best Six Months (November-April) in the black and that concerns us. DJIA was down 10.0% for this Best Six Months period and S&P 500 lost 4.1%. When the market is down during the “Best Six Months” it’s an indication that there are more powerful forces than seasonality at work and when the bullish season is over those forces may really have their say.

Here is the updated table of Down Best Six Month for DJIA since 1950. Clearly, the market performed poorly in most of these years after a down BSM, except for 2009 and 1982. Following the first back-to-back down Best Six Months since 1973-1974, the market hit a secular bear market low in March 2009. The market made a similar secular bear market bottom in August 1982 that began in 1966 and this came after the infamous 1980s double dip recession. Our concern here is that this time around we’ve only just begun. 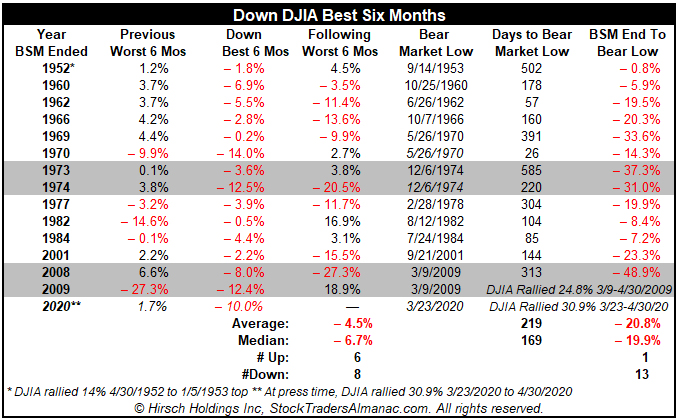 Other seasonal indicators are also flashing the caution sign. We have updated the composite graph of the seasonal pattern for the 22 years since 1950 (NASDAQ 14 years since 1971) when both the January Barometer as measured by the S&P 500 were down and the Dow closed below its previous December closing low in the first quarter.

Comparing 2020 market action to these 22/14 years, suggests a choppy year ahead with the potential for several tests of the recent lows. You can see now how market action in 2020 has reverted to the mean of this pattern, suggesting that we are in for some tough sledding in the market this year with quite a bit of chop, sideways action through the Worst Six Months (May-October) and some likely retests of the March lows.

However, we expect those lows to hold. Initial Weekly Jobless Claims have reached incredulous levels, levels never seen before since this indicator began in 1967. The number of people filing for unemployment has surpassed anything we have seen and already dwarfed the 2007-2009 Great Recession. But, the trend is improving and this is one metric we have always found useful in identifying bear market lows. If the trend continues, Initial Claims appear to have peaked already.

In the chart we have omitted Initial Claims of 3.3 million, 6.9 million, 6.6 million, 5.2 million, 4.4 million and 3.8 million the past six weeks as they would literally be off the chart. Also we have plotted the Wilshire 5000 on a logarithmic scale so that the highs and lows of the past would be discernible. All the bear market lows associated with a recession line up quite well with the spike peaks of Weekly Initial Jobless Claims.

Bear markets like 1987, which was a computer driven crash, were not accompanied by recession or an increase in Jobless Claims. But all the big bear market lows of 1970, 1974, 1982, 1990, 2001 and 2009 were marked by the peak of Jobless Claims. So keep your eye on Jobless Claims for continuing confirmation that the low is in.

It sure feels like the bottom is in, but the bad Best Six Months and the Down January Barometer/DJIA December Closing Low breach suggests we are not completely out of the woods yet. Even if March 23 turns out to be the ultimate low (and it does look like it) that does not mean the next six months or more are going to be pure rally to new highs. In fact new highs are not likely for quite some time and we will likely retest the lows.

Though recession is not yet confirmed, it is likely a foregone conclusion. We have not yet seen the impact in the economic data. It is just starting to come in. 2020 Q1 Advance GDP came in at -4.8%. This is only half the 2008-2009 low and this is just the beginning. Jobless claims the past six weeks are more than triple the job losses in the Great Recession.

How long will Vegas Casinos remain closed? How long will arenas and stadiums be empty? No one knows. There are some promising vaccines and treatments in the works and states are beginning to reopen, but there is no way of knowing when our lives and economy will return to some semblance of normal. So our outlook remains cautious for the Worst Six Months.