On the heels of one of the strongest January to April starts, May was destined for weakness. But this bodes well for June. May is notoriously weaker in pre-election years, like 2019, and after big starts to the year. The first four months of 2019 were up 17.5% for the S&P 500, the third best since 1950. Following the previous top 20 starts May was down 9 times for an average gain of 0.2%. June is more bullish in general during pre-election years and even more so after weak Mays. After big starts, 7 of the 9 subsequent May declines were followed by big gains in June.

Bonds yields have been falling and an inverted yield curve is not a great sign, but our research finds that it really isn’t until the Effective Fed Funds Rate is higher than the entire yield curve, including the long end, that you get an indication that a recession is imminent. Even still the two complete inversions back in December 1985 and December 1986 were years before Gulf War 1 fueled the July 1990 to March 1991 recession. Point being these short-middle end yield curve inversions are not especially indicative of an impending recession anytime soon. The Fed projected slowing growth and they can fix the inverted yield curve in a single action. Plus this is right in line with bond seasonality. Falling yields are typical this time of year during the worst six months.

Technically the market is under pressure and looking for support here at S&P 2775, which sits right at the 200 DMA, but also runs through several gaps, consolidations and resistance levels over the past year and a half. It tested 2775 yesterday and bounced off it again today. 2725 is the next level of support near the March lows – a 7.5% correction. The next level of support is 2650, at the top of the December V-drop and end of January breakout – a 10% Correction. Then 2580 at the February/April 2018 lows – 12.4% correction.

President Trump and the Fed are highly sensitive to market action. Last fall was a case in point. The Fed did a 180 and ceased the rate tightening cycle and Trump delayed the tariffs. If the stuff hits the fan and the market nears bear territory both will likely act quickly. Mr. Trump is a business and market cycle watcher and knows he needs a bull market for reelection. He has hung his hat on it. Expect a deal with China after the summer or sooner if the market drops further so that Trump can point to new highs as we head into the election year.

The recent decline in market sentiment is not a bad sign. Market sentiment is generally a contrary indicator. Markets climb walls of worry because folks on the sideline slowly feel left out and creep back in. Market Sentiment was elevated recently but not extreme. Besides it’s the worst six months and markets struggle at this time of year. Add in the China trade battle and domestic political squabbles and folks are prone to shift their attention away from Wall Street head for the beach.

As illustrated in the accompanying chart, overall the market is tracking the seasonal patterns quite closely, especially for a pre-election year – albeit with a bit more magnitude than average. We are not expecting a bear market to emerge in the near-term, but a correction or pullback like the market experienced in Q4 of last year is now in the cards. After the market’s stellar four-month run, at a bare minimum a period of backing and filling in the near-term is likely. While we do not anticipate much upside over the next 5 months or so, June is set up for a boon. 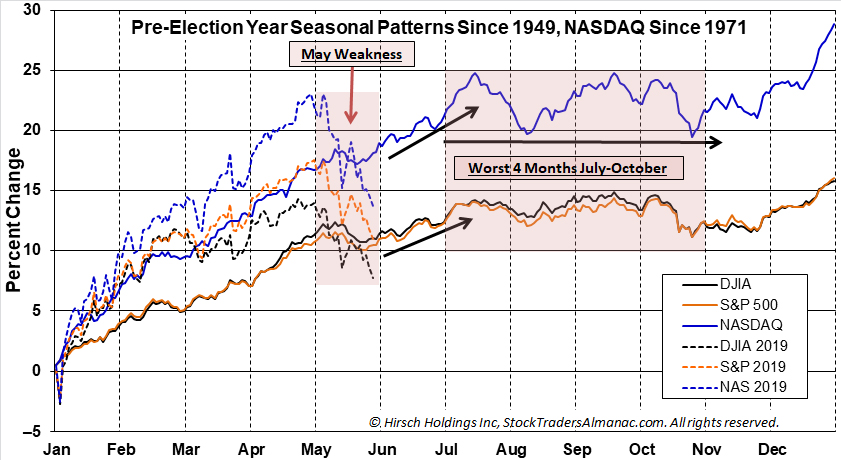