To all the market seasonality naysayers and “Sell in May” or Best Six Months/Worst Six Months critics, we say thank you for your skepticism. Despite your disbelief (and perhaps because of it) the recurring seasonal market patterns highlighted in the Stock Trader’s Almanac continue to persist. Of course they are not perfect and do not work 100% of the time, and some have fallen by the wayside and some have shifted – we’ve tracked and updated those.

However, supported by a host of academic studies and papers (just Google them yourself) and now years of evidence-based results, our Tactical Seasonal Best & Worst Six Months Switching Strategy, a slightly more sophisticated version of “Sell in May and Go Away,” continues to outperform over the long and short term, 2017 notwithstanding. Yes the Worst Six Months (or “Sell in May”) was quite positive in 2017 and better than the Best Six.

This has happened before as it did in 2009 (Post Financial Crisis) and 2003 (Iraq war) and it may again. But that has not changed or tainted the seasonality, strategy or results. Just think back to how well the market and the Switching Strategy did following those years. And remember we are not talking about the plain vanilla “Sell in May” on May first (see page 52 of the Stock Trader’s Almanac 2018 for the results of our Best Six Months Switching Strategy using technical timing. Here are the results since 2009 to give you an idea. 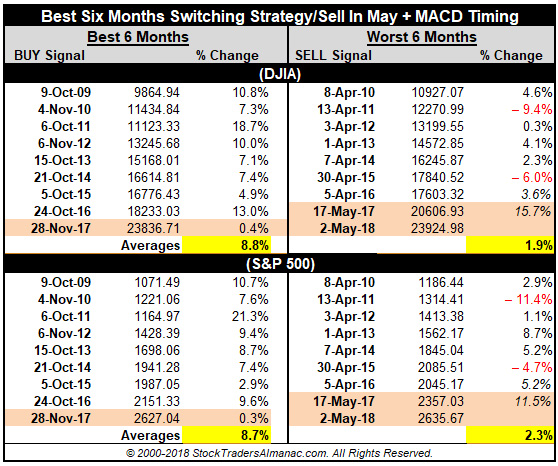 So far since our Best Six Months Seasonal MACD Sell Signal for the Dow and S&P 500 the Dow is up about 2.1% and the S&P 500 is up about 2.6%. Definitely a solid move, but this has enabled us to take some profits and sell losers at favorable prices. Bonds have ticked up recently as stocks have begun to weaken again as seasonality and midterm machinations begin to kick in.

As most presidents do, President Trump has ramped up his efforts to push through his more difficult, less savory policy initiatives before the usual loss of Congressional seats in the midterm election. It will be more difficult to pass any new legislation and more likely he’ll receive greater pushback from Congress on his executive orders, decrees and decisions if he loses a majority in one or both Houses of Congress.

Meanwhile democratic midterm election rhetoric has begun to heat up and the Russia collusion probe battle continues. Geopolitically, dysfunction in Italy has rekindled Eurozone breakup fears and rattled the market and now President Trump is playing hardball again on Tariffs with everybody, changing his tune and upending international trade agreements. Good, bad, or indifferent, this is the kind of uncertainty that can roil the stock market. And we still have the on-again/off-again potential powder keg situations in North Korea, Iran, Syria and the rest of the Mideast and Near East hotspots where the action has picked up again.

This is why we believe that “Sell in May” is critical this year. Not selling willy-nilly and going away, but making the kinds of tactical, strategic moves we have already begun to implement and waiting for a better buying opportunity more likely later in Q3 or early Q4 as is quite common in the midterm year – what we call the “Bottom Picker’s Paradise” right at the sweet spot of the 4-year cycle.

As we enter the cruel month of June, the last month of NASDAQ’s Best 8 Months, our technical indicators are beginning to sour. So be nimble, stay vigilant and ready to take on a more defensive, risk-off position over the next several weeks and months.