As you can see in the accompanying chart the U.S. stock market has been tracking rather close to the historical seasonal pattern for Pre-Election Years. As we have pointed out here the past several months, outsized gains are to be expected this year based on the Pre-Election Year pattern illustrated in the chart, especially following our positive January Indicator Trifecta. But we have also warned these gains would not come without pause and correction.

After the third best first-four-month start to the year since 1950 for the S&P 500, up 17.5%, May was destined for weakness as it is also notoriously weaker in Pre-Election Years. But that augured well for June. Now that June has delivered, the prospects for July and the Worst Four Months July-October are less than sanguine. June 2019 was the best June for the Dow since 1938, the S&P 500 since 1955 and NASDAQ since 1995.

Historically July has been weaker after a positive June. July averages just 0.48% for the S&P 500 after an up June compared to a gain of 2.84% after a down June. However, even if July and the Worst Four Months suffer a correction or go sideways as we expect, the full year is still on pace for additional gains after the usual annual soft patch. Also visible in the chart is what we call Christmas in July for NASDAQ. This 12-day Midyear Rally for NASDAQ that runs from the last three trading days of June through the 9th trading day of July appears to be underway.

June is the last month of NASDAQ’s Best 8 Months and U.S. equity markets have been tracking seasonal patterns closely this year, which suggests reduced volume trading as folks begin the annual summer exodus from The Street and choppy sideways trading over the next four months. Technical readings and market internals are pointing to a market running out of steam. The world stage is featuring some challenging events. U.S. presidential campaign politics are now ramping up to full swing, highlighting domestic political disputes, standoffs and unfinished business. Diplomatic and trade issues also remain front and center.

Major market gains promise to be hard to come by this summer and early fall. But after that we expect a run to new highs by yearend. So stick to the drill and resist getting sucked into the “summer rally” hype. Our posture remains market neutral and defensive. 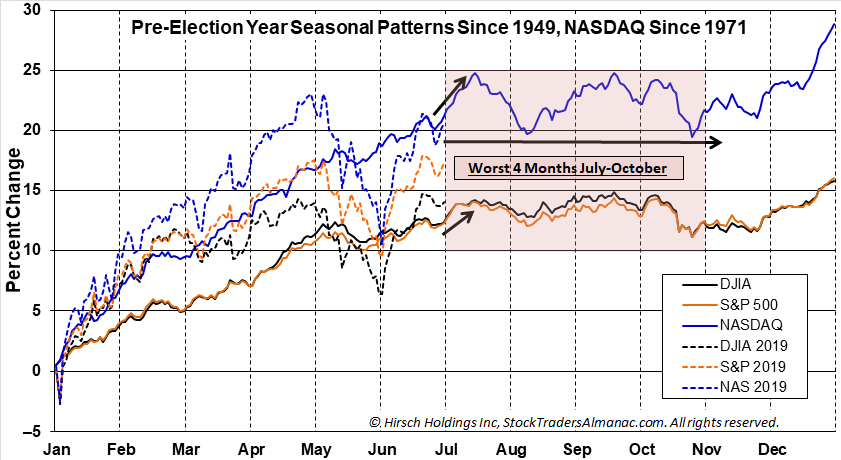