Geopolitical concerns over the past few months from snafus and issues at the U.S. southern border over immigration disputes to tough tariff talk and trade war concerns have been shrugged off by the market since the end of June. Positive Q2 earnings, rising GDP growth, sustained unemployment and low rates continue to please the market, sending the market higher in July. This put DJIA up 4.00%, S&P 500 up 3.75% and NASDAQ up 4.40% for the month of July so far, qualifying this as a “Hot July Market”.

Gains of this magnitude for July, however, have frequently been followed by a late-summer or autumn selloffs and better buying opportunities than now. In the past, full-month July gains in excess of 3.5% for DJIA have been followed historically by declines of 6.8% on average in the Dow with a low at some point in the last 5 months of the year.

Our concern presently is that as the market enters the historically worst two months of the year, August and September, it is getting a bit extended. This is reminiscent of the market in January 2018. Equity prices are once again pushing the top of the trading range and sentiment is heating up again. Sentiment is not quite as high as it was in January, but the market is more vulnerable seasonally as August is historically the worst month of the year. Volume tends to dry up during the vacation month leaving a vacuum of buyers that has frequently sucked the market lower.

In the chart below of the S&P 500 Seasonal Patterns, you can clearly see the S&P 500 in 2018 as represented by the black line finally poking above recent overhead resistance at the March and June highs. However, it is now at the time of the year historically where the market has stalled at its seasonal peak. The green line representing all years since 1949 and the blue line representing the years since the 1987 Crash both enter a sideways to lower trajectory from August through October. 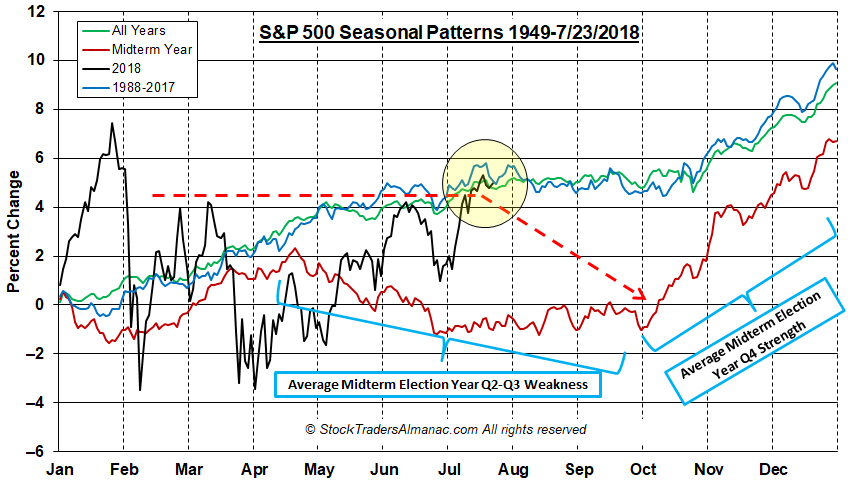 The red line that represents the average of all midterm years since 1949 is clearly weaker during the historically worst six months May-October. This year has defied history for now, but the concern is that the market is poised to revert to the mean and consolidate over the next three months, more in line with the midterm year seasonal pattern.

However, we are not expecting any major selloff or decline at this juncture. We searched high and low and negative indicators and data are few and far between. The biggest risk to the market right now is the Fed. So far this new Fed under the guidance of Chairman Powell seems to be doing a superlative job. But that job entails normalizing rates as much as possible and reducing the balance sheet to chaperon the economy and market into a healthy growth without the Kool-Aid of super easy money.

For now, expect the market to fade into summer with increased volatility heading into what promises to be a rather contentious midterm election season with a low point in the August-October time frame, holding the February/March lows at worst. Then as we hit the sweet spot of the 4-Year Cycle, which begins in Q4 of the midterm year (as you can see in the chart) and runs through Q2 of the pre-election year we expect the market to rally to new highs toward yearend 2018 and into 2019.