April is the last month of DJIA’s and S&P 500’s “Best Six Months” of the year. As you can see in the accompanying chart of the “Pre-Election Year Seasonal Patterns” the major U.S. stock market indices have historically rallied quite sharply through April. Then DJIA in black and S&P 500 in green historically begin to move sideways at the beginning of the “Worst Six Months” (Sell in May) in May and June while NASDAQ in blue continues to run higher through June. This is a clear illustration of NASDAQ’s “Best 8 Months.” 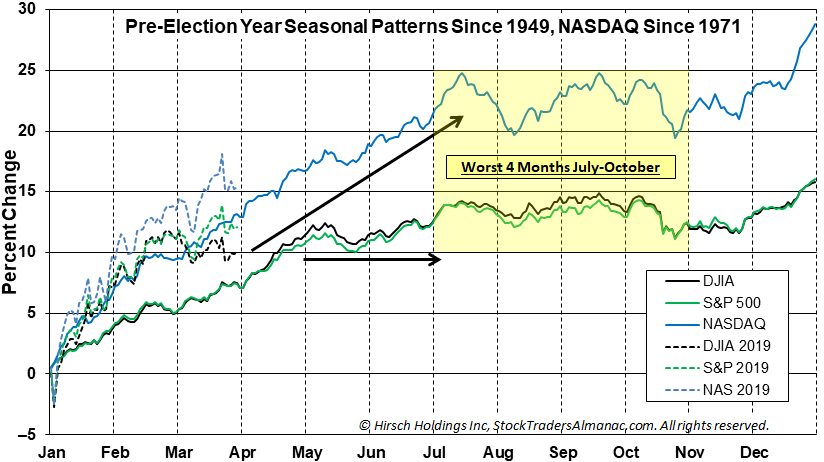 It is during the “Worst 4 Months” July-October where the market is most prone to bumps, pullbacks and corrections with August and October standing out on the chart in Pre-Election Years. However, with our January Indicator Trifecta coming in 3-for-3 positive our 2019 Annual Forecast Best Case scenario looks to be playing out:

“Best Case – Everything resolves quickly. Fed becomes accommodative. Trade deals are worked out expeditiously. Trump tacks towards the center and works with congress and does not get “Muellered.” Typical pre-election year gains of 10-15% for Dow and S&P 500 and 20-30% for NASDAQ.”

We would not be sold bold as to say everything has resolved, but the Fed has surely become accommodative. President Trump has tacked to the center a bit and avoided being “Muellered.” It would help if Congress and the President would work more together, but you can’t expect everything. There is no trade deal with China yet, but it sure seems imminent. Then there is Brexit risk. The latest watercooler polls have even money on which comes first, a China trade deal or a resolution to Brexit. In-house handicapping is laying odds on China at the moment.

Technically speaking we are still dancing around the formidable resistance we discussed last month at the 2815 level on the S&P 500. It would not be surprising if we left 2815 behind for a while and made a run at new highs. We could easily test 2815 as support during a correction later this year. New highs are likely again in Q4. We are more concerned about a bear market next year when bare-knuckle election-year politics is likely to get nastier and global economic woes could take their toll.

Finally, let’s address all the hysteria around the latest yield curve inversion. The Fed caught the market off-guard when it did a 180 at its last FOMC meeting by going completely dovish and ending the tightening cycle for all intents and purposes. This sudden change in policy stance further inverted the yield curve. This has created a Fed vs. Market situation.

Growth has been looking tepid and with US interest rates much more attractive than international markets there has been greater demand for US Treasuries, driving short term rates lower causing this inversion of the short end of the yield curve. This is likely to resolve as the Atlanta Fed’s GDPNow model estimate for 2019 Q1 is now trending higher.

Yes, an inverted yield curve is not a great sign, but our research found that historically it really has not been until the Effective Fed Funds Rate is higher than the entire yield curve, including the long end, that we have had an indication that a recession is imminent.

Even still the two complete inversions back in December 1985 and December 1986 were several years before the Gulf War 1 fueled the July 1990 to March 1991 recession. Point being these short-middle end yield curve inversion have not historically been especially indicative of an impending recession anytime soon.

So following what has been a typical end of Q1 consolidation, we expect an April-June rally to test the highs, followed by a potential August-October hit, with a strong finish for 2019 before we have to contend with another contentious battle for control in Washington in 2020.