Despite all the warnings and rhetoric from the U.S. et al and Putin’s own words the world still seemed unprepared and shocked by Russia’s full-scale invasion of Ukraine that got officially underway at dawn local time February 24, 2022, with the brazen, matter-of-fact speech by Russian leader Vladimir Putin in no uncertain terms threatening the west with historic wrath should they interfere.

Under the auspices of protecting the breakaway regions and his disdain for NATO’s continued eastward expansion toward his borders he launched his gambit to take over Ukraine as he made the case that Ukraine is rightfully and has historically for centuries been part of Russia. The U.S. was not too thrilled with Russian Missiles in Cuba in October 1962, which at the height of the Cold War set off the Cuban missile crisis.

In the table below we compiled the relevant historical geopolitical events that had an impact on energy prices and/or sovereign boundaries. As you can see the longer more drawn-out crises were accompanied by weaker markets. Arguably back in 2014 Putin stopped in Crimea due to plunging oil prices hurting his coffers. Our guess is he will use the same playbook or similar for the rest of Ukraine and eventually try to kick out the pro-western government and hold some kind of election to install and establish a new pro-Russian government. 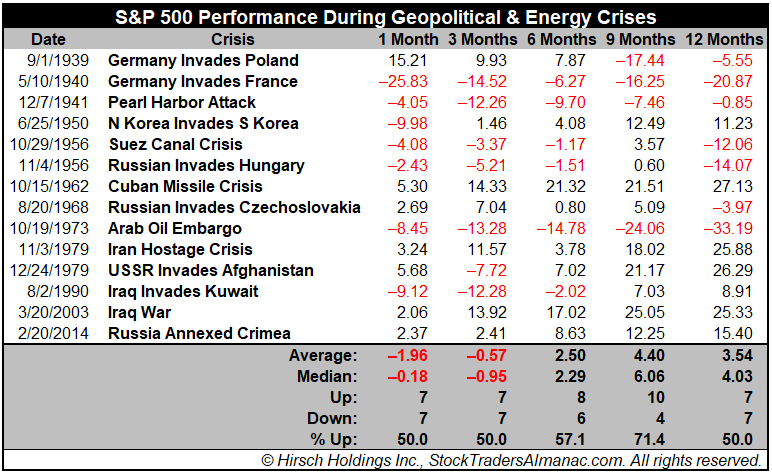 Russia will try to take over all or most of Ukraine. There will be resistance as we have already witnessed, and it appears to be stouter than Russia expected. Ukraine’s military is no match for Russia and there is not much the west can do about it either on the ground or militarily. We just don’t have the stomach or bandwidth for it. Sure, we will battle him on the economic front with sanctions and with cyber as well as support for Ukraine and NATO, but Russia has prepared for this and has withstood it before for decades during the Cold War.

We are likely looking at sanctions on Russia for many years. He has been preparing for this for years and in earnest when he ramped up his rhetoric six months ago in his notorious essay. He does not need the west now and it looks like China has clearly approved this action by the recent friendly summits and likely has his back. Putin has been selling dollars and amassing gold in preparation for this and has benefited greatly from the rise in oil prices.

However, the market showed some impressive resilience to this invasion with the big rebound off the initial selloff. As we have been warning all year long this is typical midterm election action for a new president where foreign adversaries take advantage of new administration perceived weakness and unpreparedness.

Unfortunately, our worst-case scenario has now come into play. But on the positive side it looks like the midterm bottom is nearing. When we made our 2022 Annual Forecast this past December prospects for a full-scale Russian invasion of Ukraine were low. For now, we believe volatility is likely to continue through Q2 and Q3 as the market seeks support, digests the developments in Ukraine and elsewhere in the geopolitical arena, and on the Fed/inflation front. We still believe the Q4 rally illustrated in our updated chart here of the S&P 500 Midterm Election Year Seasonal Pattern to materialize as we approach the midterm elections in the late summer or early fall.