Unfortunately the February weakness we warned about last issue began to materialize mid-month and accelerated into month-end. The “excuse du jour” is rising bond yields as the 10-Year Treasury climbed above 1.5%. The reaction to the 10-Year yield moving above 1.5% could be a little overblown. It’s barely back to pre-Covid levels. Perhaps it’s more a sign of a healthy economy and rising inflation expectations, which is precisely what the Fed has been trying to foster. We’re not overly concerned about the steepening yield curve.

But the market has been overbought and extended all year and arguably for several months in late-2020. February is the weak link in the “Best Six Months” and even weaker in Post-Election Years. After the big run-up in the first half of February folks have been looking for an excuse to take profits.

Sentiment had become rather exuberant with the Weekly CBOE Equity-Only Put/Call ratio near historic lows around and below 0.40 indicating a dearth of put-buying bears and a plethora of bulls in classic contrary indicator fashion. Our other favorite reverse psychology gauge Investors Intelligence Advisors Bullish % had been above 60% from Thanksgiving through January with the difference between Bulls and Bears above 40 from mid-November until mid-February. Excessive bullish sentiment has receded a tad, but remains elevated.

March is also softer in Post-Elections and often prone to weakness in the Week After Triple Witching with DJIA down 22 of last 33. Typical March trading comes in like a lion and out like a lamb with strength during the first few trading days followed by choppy to lower trading until mid-month when the market tends to rebound higher. But the last few days often succumb to end of Q1 selling pressure.

On the technical front we continue to track the big tech leading NASDAQ 100 Index (NDX). Recent selling has breached support levels at 13,000 and is now looking for support near 12,720 as shown in the blue line in the accompanying NDX chart. NDX 12,720 is right at the mid-December/early-January consolidation level as well as December pivot-point resistance (red dotted line) and the January monthly pivot point (blue dotted line). The old September high of 12420 still holds as major support and is just below the 10% correction level from the February 16 high of 13,774. 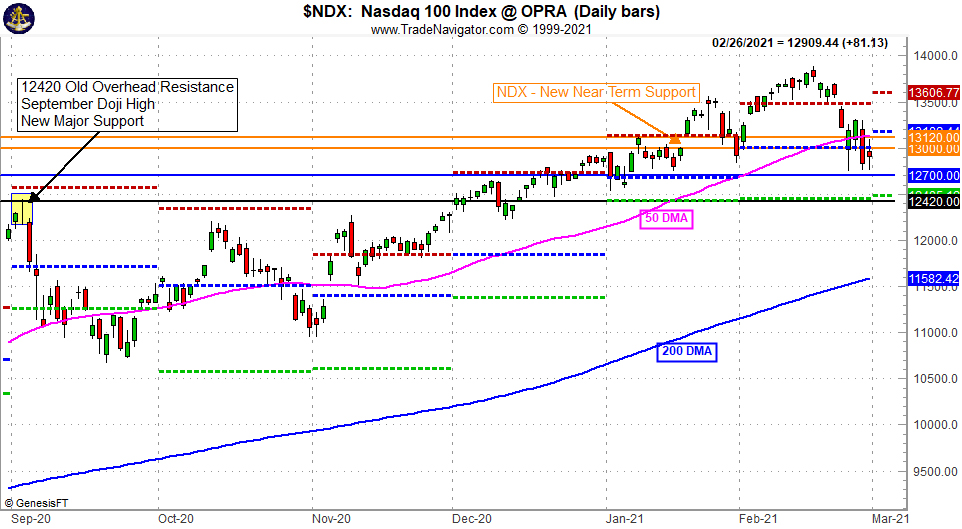 Bottom line, the market has been overdue for a pullback and has entered a historically weak stretch in the Best Six Months and Post-Election years. Covid vaccine rollout delays continue to be a concern as perfect execution has been baked into stock prices since December and any setbacks are likely to give the market jitters.

The end of Q1 has always been a volatile time for stocks as institutions shore up positions ahead of earnings season. Further consolidation is likely in March, but we expect the market to find support shortly and subsequently challenge the recent highs again in April (the Dow’s best month) as the Best Six Months comes to a close. Additional weakness can also be expected in the Worst Six Months May-October.