July 2022 Outlook: Worst Case Scenario in Play No Bottom Yet

Unfortunately, the stock market is delivering on its bearish historical 4-Year Cycle and seasonal tendencies here at the midway point of 2022. It is also playing out the less than sanguine outlook we wrote last year around this time in the 2022 Stock Trader’s Almanac (pages 10-11) and in our annual forecast from last December 16. So where do we go from here?

Much to our chagrin, we believe the short answer is that we have likely not seen the low either in price or time. Current trends are now leaning towards the “Worst Case” scenario we presented in our 2022 forecast which was for a “Mild bear market for S&P 500 with 2022 ending down 10-20%.” With S&P 500 down 20.6% year-to-date at the end of June the bear is fully in place.

As we have been guiding over the past several months, we still believe this bear to put in a typical midterm election year bottom sometime in the August-October timeframe just ahead of the midterm elections. Stocks are clearly exhibiting the historical weakness that often transpires in the Worst Six Months of the year May-October and they are also tracking the “Weak Spot” of the 4-year cycle. But we believe this should set us up for the “Sweet Spot” of the cycle from Q4 midterm year through Q2 pre-election year.

The intersection of the annual seasonal pattern and the 4-Year Cycle produces the quadrennial “Sweet Spot.” As we continue to patiently ride out this bear the chart below of the 4-year cycle may provide some solace. We are currently finalizing the 2023 edition of the Stock Trader’s Almanac so here’s a sneak peek at this new chart from the 2023 STA that highlights the midterm low and most importantly the quadrennial rally from the midterm low to the pre-election year high in what we call the Sweet Spot of the 4-year cycle.

The second and third quarter of the midterm year has been the weakest period of the entire 4-year pattern averaging losses over the 2-quarter period of -1.2% for the Dow, -1.5% for the S&P 500 and -5.0% for the NASDAQ Composite Index. But in the Sweet Spot of the cycle the Dow gains 19.3%, S&P 500 increases 20.0% and NASDAQ jumps 29.3% over the three-quarter span from midterm year Q4 to pre-election year Q2.

It is for this reason that we call midterm election years “A Bottom Pickers Paradise.” From the midterm low to the pre-election year high DJIA gains 46.8% since 1914 and NASDAQ gains a whopping 68.2% since 1974! As the 2022 bear market runs its course, we believe the market will likely bounce along sideways, testing the lows, hitting its low point in late Q3 or early Q4 in the August-October period in prototypical midterm bottom fashion. Then be prepared for the rally off that low into the Sweet Spot and beyond to new highs.

Worst First Half Since 1970

As the market logged its worst first half start to the year since 1970 with DJIA down 15.3%, S&P off 20.6% and NASDAQ down 29.5%, there has been a lot of positive spin on how great second halves are when the market is down so much in the first half. Well, we did some deeper digging and went back a bit further than some of the cherry-picked stats we have seen. 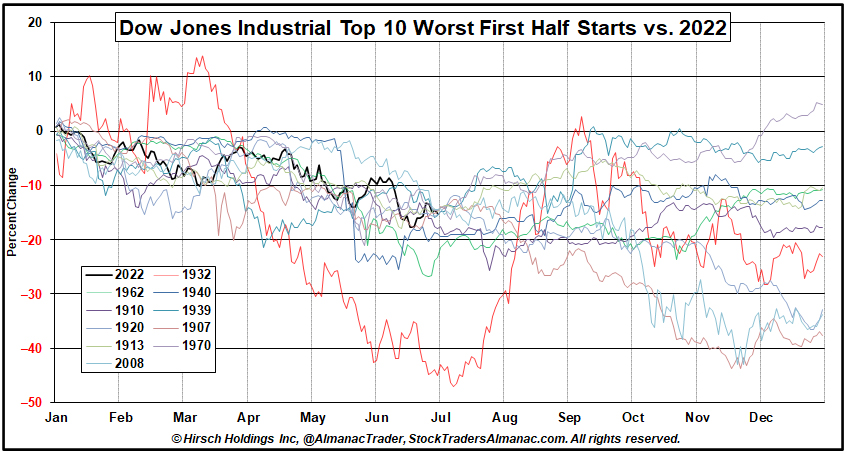 We suspect that the Fed will be wrapping up its aggressive tightening cycle at the September meeting or at least indicating a pause after three consecutive large rate increases. After the 75-basis-point hike at the June meeting another 75 is expected in July and at least another 50 in September bringing the Fed Funds rate up to 3.0%. This should coincide with the end of the Weak Spot and the final push of the midterm election campaigns ahead of the Sweet Spot.

Thankfully, the pre-election year is still the best year of the 4-year cycle and with midterm year 2022 delivering a bear as has been the tendency for the past 74 years and back further, the prospects for upside action in 2023 are good despite the gloomy present situation. Since 1949 DJIA is up an average of 16.2% in the pre-election year, S&P is up 16.8% and since 1971 NASDAQ gains an average 29.3% in the third year of the 4-year cycle.

But first we must get through the midterm elections. The drop in consumer confidence, recession fears and President Biden’s already low and dwindling approval ratings implies that the usual loss of Congressional seats by the incumbent president’s party will likely result in the Republicans taking back control of both houses of Congress.

However, this would create the best political alignment for the stock market: a Democratic president with a Republican Congress. In the chart here as you can see in the green bar this combination has produced the best market performance for an average gain on the Dow of 16.4% since 1949. If President Biden can tack to the center and facilitate some bipartisan legislation as Bill Clinton did after the 1994 midterms the market could respond rather bullishly. 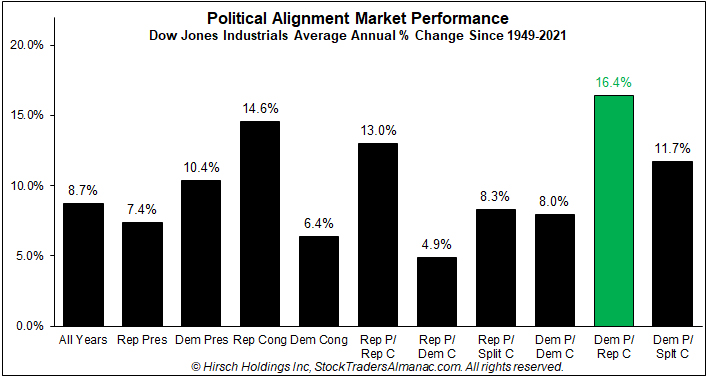