Gains of this magnitude for July, however, have frequently been followed by late-summer or autumn selloffs and better buying opportunities than now. In the past, full-month July gains in excess of 3.5% for DJIA have been followed historically by declines of 7.2% on average in the Dow with a low at some point in the last 5 months of the year. 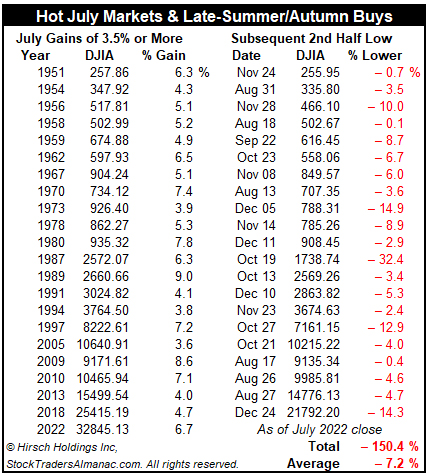 Here is a little sneak peek into the 2023 Stock Trader’s Almanac as we send it off to press that is also remarkably apropos now. The 2022 edition featured “Marty Zweig’s Investing Rules” on page 80. For the 2023 edition on this page, we are featuring “Bob Farrell’s Market Rules to Remember & Justin Mamis’ Sentiment Cycle.”

90-year-old Bob Farrell has retired to Florida, but he still imparts his forecasts and outlook to investors and traders from time to time. We will touch on his “Rules to Remember” at another time.

Justin Mamis passed away in 2019, but his books and wisdom are still relied upon regularly to this day. Mamis was a highly regarded market analyst and technician who authored three must-have books on the stock market: When to Sell (1977), How to Buy (1982), and The Nature of Risk (1991) and two must read newsletters.

Just before we presented at the CMT Association’s 2022 Annual Symposium veteran technical analyst Helene Meisler shared Mamis’ Sentiment Cycle (pictured below) along with her analysis of where in the cycle the market was at the time at the end of April 2022—in that brief pause between disbelief and panic (green circle). 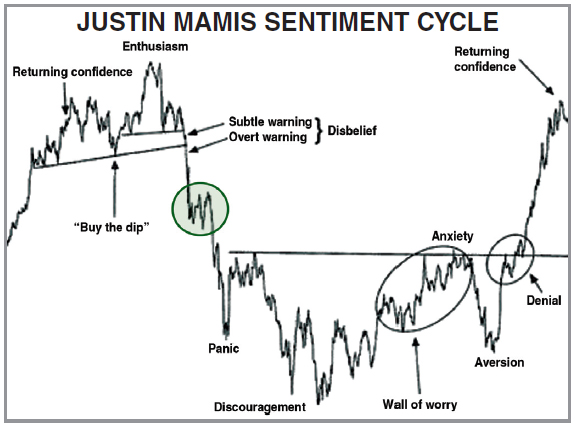 Comparing the current chart of the S&P 500 below we’ve highlighted in yellow that area of disbelief Ms. Meisler pointed out in April. Our assessment is that the June low correlates quite well with the “Panic” point on Mamis’ chart and we are now hitting the first level of “Anxiety.” This dovetails with our bearish seasonal/cycle outlook as we are entering the worst two months of the year and are smack dab in the “Weak Spot” of the 4-Year Cycle from Q2 to Q3 of the midterm election year. 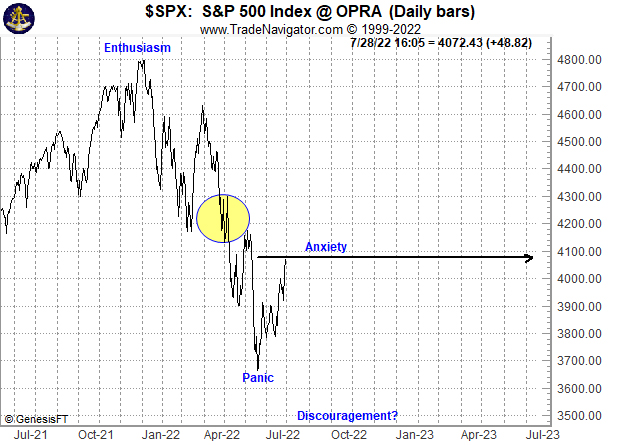 Our view on the economy is less than sanguine as we just logged the second quarter in a row of negative GDP with rampant inflation only just beginning to take its toll on Main Street. Cheerleading aside, we have not definitively averted recession. It may yet prove to be mild, but the effects of the Fed’s aggressive rate increase have yet to really hit home, and another hike is likely in September.

While the summer rally off the June lows has been impressive, the market is now running into technical resistance around the early June highs. Sentiment has rebounded with the market but is by no means bullish. Market internals have been choppy with New Lows still outpacing New Highs and without any material rise in the Advance/Decline Line.

We believe the bear market is nearing the end, but this bounce appears to be a classic bear market rally before the final push lower. Remember, July is the best month of Q3. But “Hot July Markets” like this year are often followed by lower prices and better buying opportunities later in the year.

August and September are the worst months of the year, and we are facing some rather stiff headwinds with respect to the war in Ukraine, inflation, rate hikes, growth and the midterm elections. But the “Sweet Spot” of the 4-Year Cycle from Q4 midterm year through Q2 pre-election year is only two months away. Cash is still king. Stick to the playbooks and look for a retest of the lows in the August-October period, which we believe will deliver the next fat pitch for the “Sweet Spot” and the return of the bull.