October can evoke fear on Wall Street as memories are stirred of crashes in 1929, 1987, the 554-point DJIA drop on October 27, 1997, back-to-back massacres in 1978 and 1979, Friday the 13th in 1989 and the 733-point DJIA drop on October 15, 2008. During the week ending October 10, 2008, DJIA lost 1,874.19 points (18.2%), the worst weekly decline, in percentage terms, in our database going back to 1901. March 2020 now holds the dubious honor of producing the largest and third largest DJIA weekly point declines. The term “Octoberphobia” has been used to describe the phenomenon of major market drops occurring during the month. Market calamities can become a self-fulfilling prophecy, so stay on the lookout and don’t get whipsawed if it happens.

Over the last twenty-one years, the full month of October has been a solid month for the market, ranking #3 for DJIA, S&P 500 and NASDAQ. DJIA, S&P 500, NASDAQ, and Russell 2000 have all recorded gains ranging from 1.0% by Russell 2000 to 2.7% by NASDAQ. But these gains have come with volatile trading, most notably during the early days of the month. October has opened softly with modest average gains on its first trading day by DJIA, S&P 500, and NASDAQ. On the second day, all four indexes have been weak followed by a rebound on the third trading day before additional weakness pulls the market lower through the seventh trading day. At which point, the market has historically found support and begins to rally through mid-month and beyond. 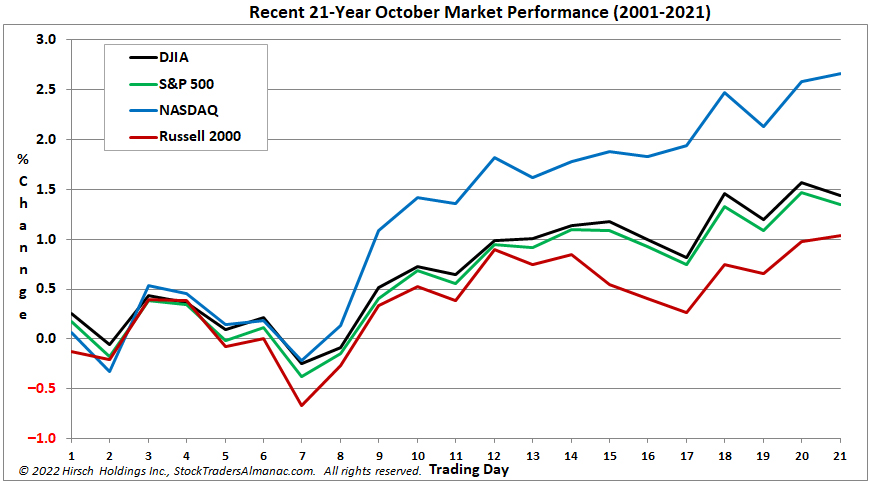 Midterm-election-year Octobers are downright stellar thanks to the major turnarounds mentioned above; ranking number one on the DJIA and S&P 500. Midterm October is NASDAQ’s second-best month and Russell 2000’s third best. This is usually where the “Sweet Spot” of the four-year-presidential-election-cycle begins. The fourth quarter of the midterm years combines with the first and second quarters of the pre-election years for the best three consecutive quarter span for the market, averaging 19.3% for the DJIA and 20.0% for the S&P 500 (since 1949), and an amazing 29.3% for NASDAQ (since 1971).

Options expiration week in October provides plenty of opportunity. On the Monday before monthly expiration DJIA has only been down 10 times since 1982 and the Russell 2000 is up twenty-three of the last thirty-two years, seventeen straight from 1990 to 2006. Expiration day has a mixed record while the week as a whole has been improving with S&P 500 recording seven straight weekly advances coming into this year. After a market bottom in October, the week after is most bullish, otherwise it is susceptible to downdrafts. 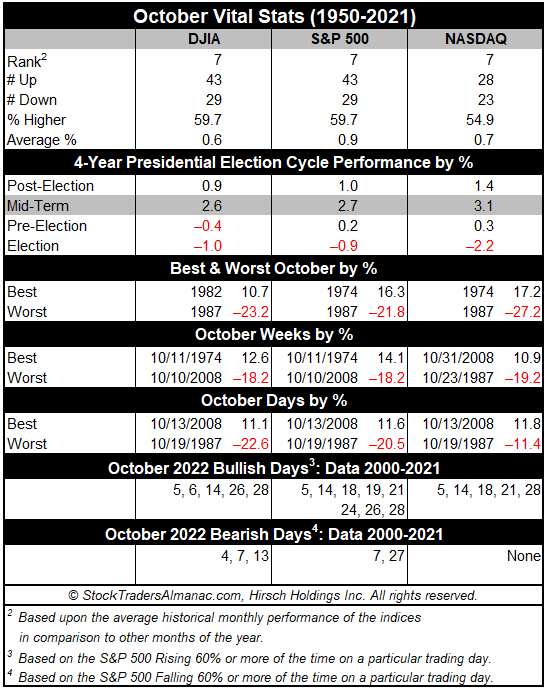