October often evokes fear on Wall Street as memories are stirred of crashes in 1929, 1987, the 554-point drop on October 27, 1997, back-to-back massacres in 1978 and 1979, Friday the 13th in 1989 and the 733-point drop on October 15, 2008. During the week ending October 10, 2008, Dow lost 1,874.19 points (18.2%), the worst weekly decline in our database going back to 1901, in percentage terms. March 2020 now holds the dubious honor of producing the worst and third worst DJIA weekly point declines. The term “Octoberphobia” has been used to describe the phenomenon of major market drops occurring during the month. Market calamities can become a self-fulfilling prophecy, so stay on the lookout and don’t get whipsawed if it happens.

Should a meaningful decline materialize in October, it is likely to be an excellent buying opportunity, especially for any depressed technology and small-cap shares. October is also the end of the Dow and S&P 500 “Worst 6 Months” and NASDAQ “Worst 4 Months”. Remain attentive for our Seasonal Buy Signal which can occur anytime beginning October 1. 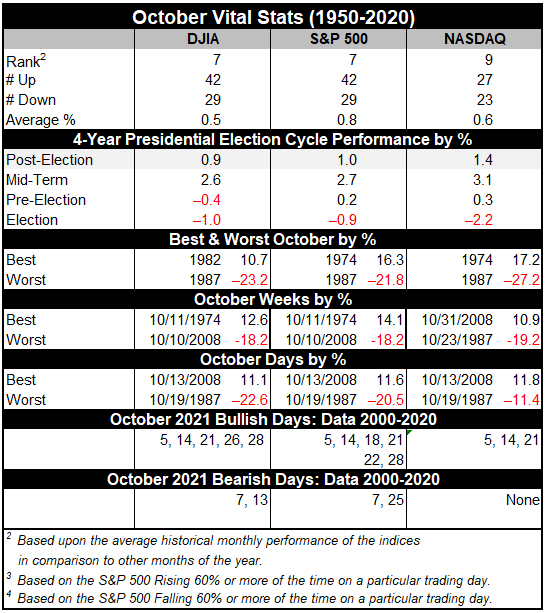