As part of the Best Six/Eight Months, March has historically been a solid performing month with DJIA, S&P 500, and NASDAQ all advancing more than 62% of the time with average gains ranging from 0.6% by NASDAQ to 1% by S&P 500. Over the recent 21-year period, March has tended to open well with gains accumulating over its first three trading days. Temporary weakness follows before moving modestly higher into mid-month through month’s end.

Julius Caesar failed to heed the famous warning to “beware the Ides of March” but investors have been served well when they have. Stock prices have a propensity to decline, sometimes rather precipitously, during the latter days of the month. In March 2020, DJIA plunged nearly 4012 points (-17.3%) during the week ending on the 20th. Removing the highly volatile Marches of 2009 and 2020 from the recent 21-year chart has a minimal effect on the overall monthly pattern.

Normally a solid performing market month, March improves in midterm-election years (see Vital Statistics table below). In midterm years March ranks: 4th best for DJIA and S&P 500 and 3rd best for NASDAQ while the small-cap Russell 2000 lands at second best. DJIA, S&P 500 and Russell 2000 have been up for five of the last six midterm Marches.

Saint Patrick’s Day is March’s sole recurring cultural event. Gains on Saint Patrick’s Day have been greater than the day before and the day after. Perhaps it’s the celebratory mood of the patron saint’s holiday that boosts the market and the aftereffects of that celebration that causes equity markets to languish. Or maybe it’s the fact that Saint Pat’s usually falls in historically bullish Triple-Witching Week. 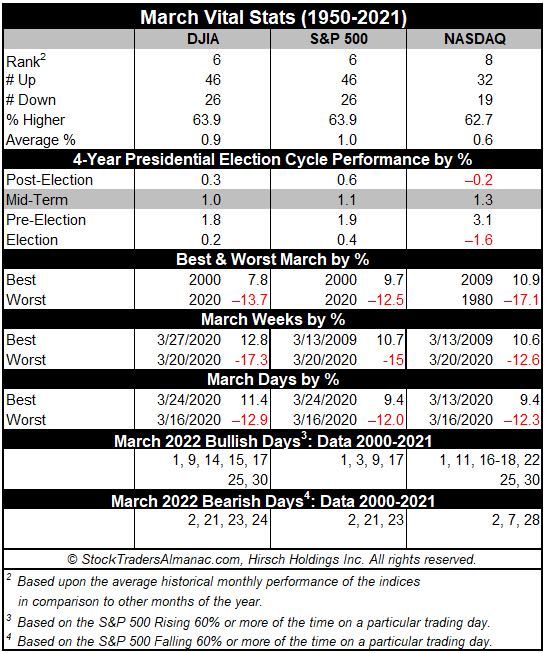