Over the last 51 years June has shone brighter on NASDAQ stocks as a rule ranking fifth best with a 1.0% average gain, up 29 of 51 years. This contributes to NASDAQ’s “Best Eight Months” which ends in June. June ranks near the bottom on the Dow Jones Industrials just above September since 1950 with an average loss of 0.2%. S&P 500 performs similarly poorly, ranking ninth, but essentially flat (0.1% average gain). Small caps also tend to fare well in June. Russell 2000 has averaged 0.9% in the month since 1979. 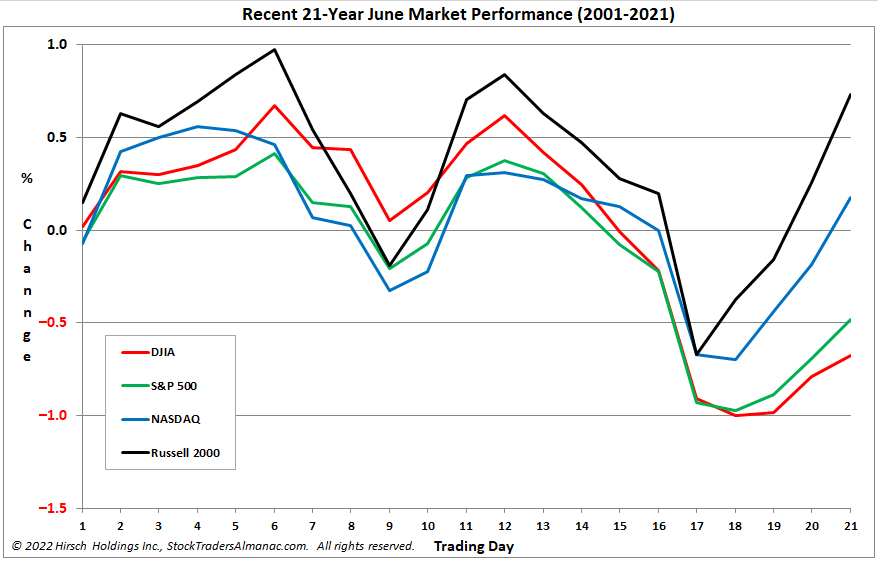 Over the last twenty-one years, June has been a rather lackluster month for the market. DJIA and S&P 500 have recorded average losses in the month. NASDAQ and Russell 2000 have fared better with modest average gains. Historically the month has opened respectably, advancing on the first and second trading days. From there the market then drifted sideways and lower into or near negative territory depending upon the index just ahead of mid-month. Here the market rallied to create a nice mid-month bulge that quickly evaporated and turned into losses. The brisk, post, mid-month drop is typically followed by a month end rally lead by technology and small caps.

The second Triple Witching Week of the year brings on some volatile trading with losses frequently exceeding gains. On Monday of Triple-Witching Week the Dow has been down fourteen of the last twenty-five years. Triple-Witching Friday is somewhat better, Dow has been up ten of the last nineteen years, but down six of the last seven. Full-week performance is choppy as well, littered with greater than 1% moves in both directions. The week after Triple-Witching Day is horrendous. This week has experienced DJIA losses in 27 of the last 32 years with average losses of 1.0%. NASDAQ and Russell 2000 had fared better during the week after, but that trend appears to be fading. 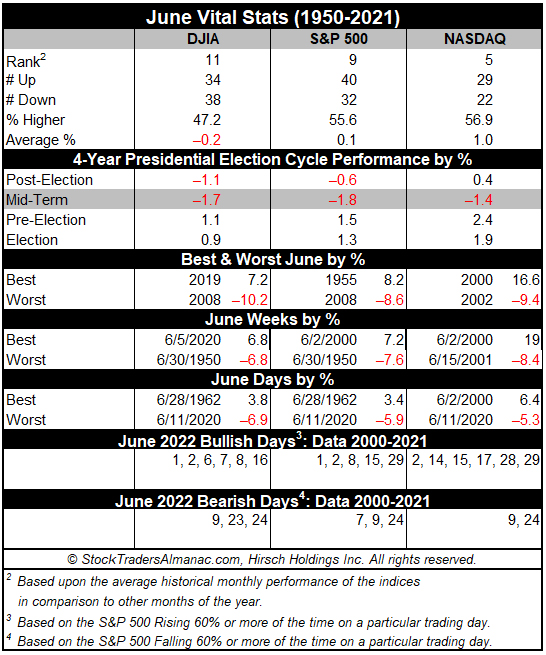 June’s first trading day is the Dow’s best day of the month, up 27 of the last 34 years. Gains are sparse throughout the remainder of the month until the last three days when NASDAQ stocks begin to exhibit strength. The last day of the second quarter was a bit of a paradox as the Dow was down 17 of the last 31 (however, up 9 of the last 11) while NASDAQ has a nearly the opposite record, up 21 of the last 30.

Beginning this year, the market will observe Juneteenth National Independence Day on June 20. The holiday officially falls on June 19 every year, but NYSE rules shift its observance to Monday this year. As this is the first year the market will be closed in observance of this new Federal holiday, no stats are presently available. The holiday’s proximity to quarterly options expiration and Father’s Day, could lead to some additional volatility ahead of the long weekend.