June has shone brighter on NASDAQ stocks over the last 49 years as a rule ranking seventh with a 0.8% average gain, up 27 of 49 years. This contributes to NASDAQ’s “Best Eight Months” which ends in June. June ranks near the bottom on the Dow Jones Industrials just above September since 1950 with an average loss of 0.2%. S&P 500 performs similarly poorly, ranking tenth, but essentially flat (0.1% average gain). Small caps also tend to fare well in June. Russell 2000 has averaged 0.8% in the month since 1979.

In election years since 1950, June’s performance improves notably. June is the #5 DJIA month in election years averaging a 0.9% gain with a record of twelve advances in seventeen years. For S&P 500, June is #2 with an average gain of 1.3% (14-3 record). Election-year June ranks #4 for NASDAQ and Russell 2000 with average gains of 1.6% and 1.4% respectively. This performance improvement is most likely the result of presidential candidate field being sufficiently narrowed, and the ultimate nominees being identified.

The second Triple Witching Week of the year brings on some volatile trading with losses frequently exceeding gains. On Monday of Triple-Witching Week the Dow has been down thirteen of the last twenty-three years. Triple-Witching Friday is somewhat better, up ten of the last seventeen years, but weaker over the past 27 years, up fourteen, down thirteen with an average loss of 0.22%. Full-week performance is choppy as well, littered with greater than 1% moves in both directions. The week after Triple-Witching Day is horrendous. This week has experienced DJIA losses in 26 of the last 30 years with average losses of 1.07%. NASDAQ and Russell 2000 had fared better during the week after, but that trend appears to be fading.

June’s first trading day is the Dow’s best day of the month, up 25 of the last 32 years. Gains are sparse throughout the remainder of the month until the last three days when NASDAQ and Russell 2000 stocks begin to exhibit strength. The last day of the second quarter is a bit of a paradox as the Dow has been down 17 of the last 29 while NASDAQ and Russell 2000 have nearly the opposite record. 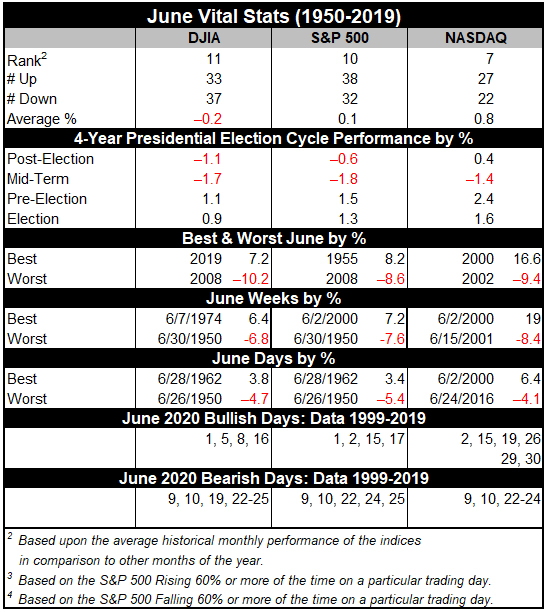