January has quite a reputation on Wall Street as an influx of cash from yearend bonuses and annual allocations has historically propelled stocks higher. January ranks #1 for NASDAQ (since 1971), but fifth on the S&P 500 and DJIA since 1950. January is the last month of the best three-month span and holds a full docket of indicators and seasonalities.

In midterm years, January ranks near the bottom since 1950. Large-caps have been the worst with S&P 500 ranking #10 (third worst) and DJIA ranking #9. Technology and small-cap shares fare slightly better in the rankings, but small-cap average performance is still negative and NASDAQ is only barely positive.

On pages 112 and 114 of the Stock Trader’s Almanac 2022 we illustrate that the January Effect, where small caps begin to outperform large caps, actually tends to start in mid-December. Early signs of the January Effect can be seen when comparing the Russell 2000 to the S&P 500 since around December 15. Historically, the majority of small-cap outperformance is normally done by mid-February, but strength can last until mid-May when indices typically reach a seasonal high.

The first indicator to register a reading in January is the Santa Claus Rally. The seven-trading day period began on the open on December 27 and ends with the close of trading on January 4. Normally, the S&P 500 posts an average gain of 1.3%. The failure of stocks to rally during this time has tended to precede bear markets or times when stocks could be purchased at lower prices later in the year.

The long-term record has been stupendous, an 84.5% accuracy rate, with only 11 major errors since 1950. Major errors occurred in the secular bear market years of 1966, 1968, 1982, 2001, 2003, 2009, 2010 and 2014 and again in 2016 as a mini bear came to an end. The tenth major was in 2018 as a hawkish Fed continued to hike rates even as economic growth slowed and longer-term interest rates fell. Historical levels of support from the Fed and Federal governments in 2020 quickly undid the market damage caused by the Covid induced economic shutdown. 2021 was the 12th major error for the January Barometer. The market’s position on the last trading day of January will give us a better read on the year to come. When all three of these indicators are in agreement it has been prudent to heed their call. 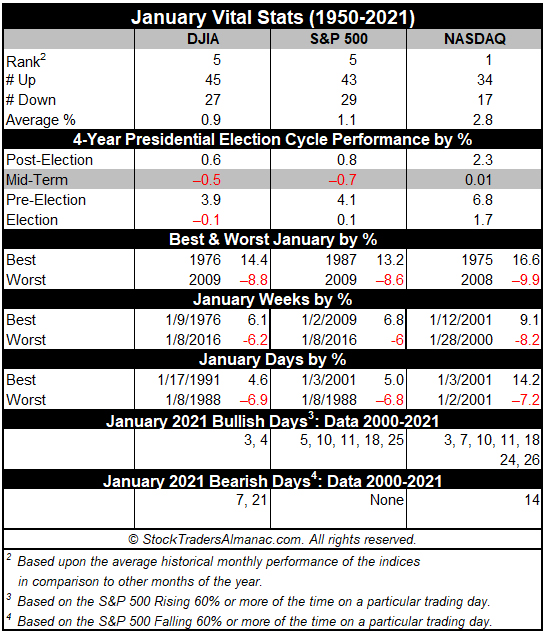