Even though February is right in the middle of the Best Six Months, its long-term track record, since 1950, is not all that stellar. February ranks no better than seventh and has posted paltry average gains except for the Russell 2000. Small cap stocks, benefiting from “January Effect” carry over; tend to outpace large cap stocks in February. The Russell 2000 index of small cap stocks turns in an average gain of 1.1% in February since 1979—just the seventh best month for that benchmark.

The first trading day is bullish for DJIA, S&P 500 and NASDAQ. Average gains on the first day over the last 21-year period are right around 0.5%. Strength then tends to fade after that until the stronger eighth, ninth and eleventh trading days.

Presidents’ Day is the lone holiday that exhibits weakness the day before and after (Stock Trader’s Almanac 2019, page 88). The Friday before this mid-winter three-day break can be treacherous and average declines persist for three trading days after the holiday going back to 1980. 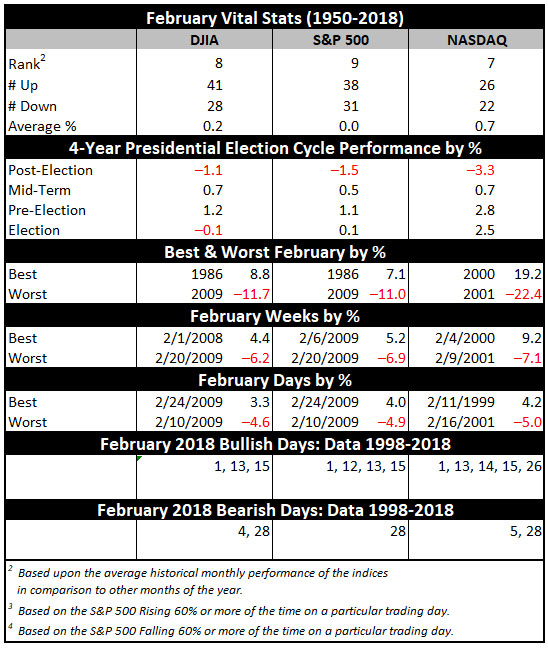 In pre-election years, February’s performance generally improves with average returns all turning positive. NASDAQ performs best, gaining an average 2.8% in pre-election-year Februarys since 1971. Russell 2000 is second best, averaging gains of 2.5% since 1979. DJIA and S&P 500, the large-cap indices, tend to lag with average advances of around 1.0%.