December is the number three S&P 500 and Dow Jones Industrials month since 1950, averaging gains of 1.5% and 1.6% respectively. It’s the second-best Russell 2000 (1979) month and fourth best for NASDAQ (1971). In 2018, DJIA suffered its worst December performance since 1931 and its fourth worst December going all the way back to 1901. However, the market rarely falls precipitously in December and a repeat of 2018 does not seem highly likely this year. When December is down it is usually a turning point in the market—near a top or bottom. If the market has experienced fantastic gains leading up to December, stocks can pullback in the first half of the month. 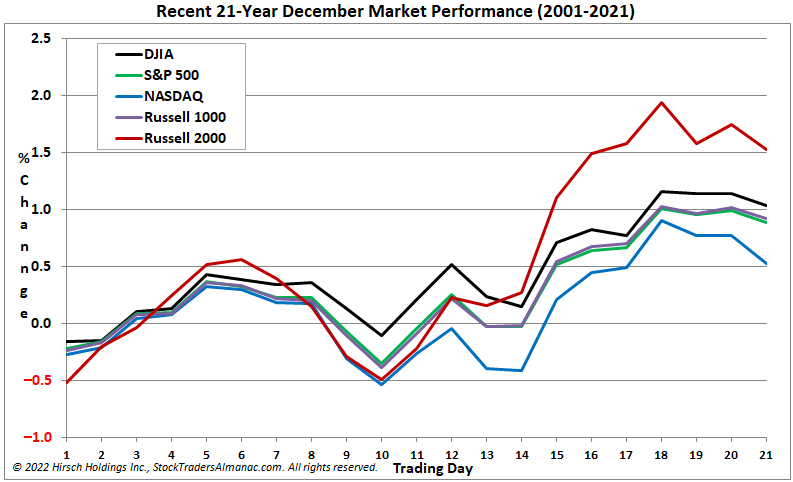 Trading in December is holiday-inspired and fueled by a buying bias throughout the month. However, the first part of the month tends to be weaker as tax-loss selling and yearend portfolio restructuring begins. December’s first trading day has been bearish for S&P 500 over the last 21 years. A modest rally through the fifth or sixth trading day also has fizzled going into mid-month. It is around this point that holiday cheer tends to kick in and propel the indexes higher with a pause near month-end. Regardless, December is laden with market seasonality and important events.

Small caps tend to start to outperform larger caps near the middle of the month (early January Effect). The “Santa Claus Rally” begins on the open on December 23 and lasts until the second trading day of 2023. Average S&P 500 gains over this seven trading-day range since 1969 are a respectable 1.3%. The “Santa Claus Rally,” (2023 STA p 118) was invented and named by Yale Hirsch in 1972 in the Almanac.

Trading the day before and the day after Christmas is generally bullish across the board with the greatest gains coming from the day before (NASDAQ up eleven of the last fifteen). On the last trading day of the year, NASDAQ has been down in fifteen of the last twenty-two years after having been up twenty-nine years in a row from 1971 to 1999. DJIA, S&P 500, and Russell 1000 have also been struggling recently and exhibit a bearish bias over the last twenty-one years. Russell 2000’s record very closely resembles NASDAQ, gains every year from 1979 to 1999 and only six advances since. 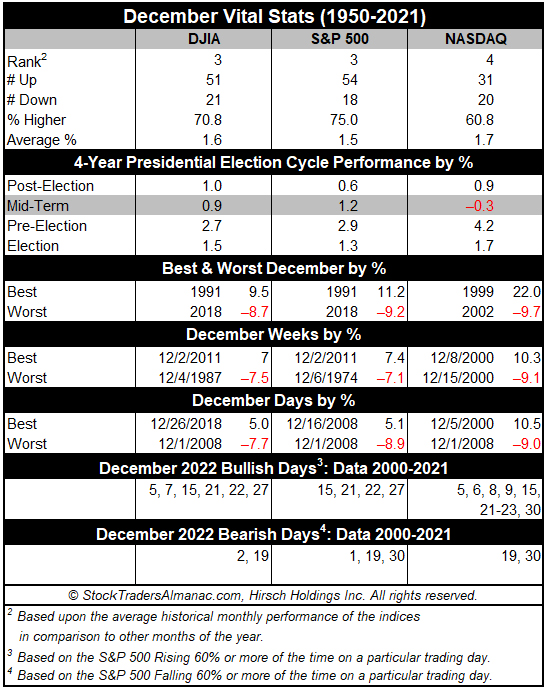