HomeSeasonal StrategiesAlmanac Update April 2019: Up Thirteen Years in a Row

Almanac Update April 2019: Up Thirteen Years in a Row

The first trading day of April and the second quarter, has enjoyed notable strength over the past 24 years, advancing 17 times with an average gain of 0.37% in all 24 years for S&P 500. However, four of the seven declines have occurred in the last six years. Other declines were in 2001, 2002 and 2005. DJIA’s record on April’s first trading day matches the S&P 500, 17 advances in 24 years. NASDAQ recent performance is slightly weaker than DJIA and S&P 500, but the day is still bullish for technology stocks in general.

April marks the end of our “Best Six Months” for DJIA and the S&P 500. On April 1st, we will begin looking for our seasonal technical sell signal and corresponding early signs of seasonal weakness. Even in historically strong pre-election years the “Worst Six Months” have been lackluster on average.

The first half of April used to outperform the second half, but since 1994 that has no longer been the case. The effect of April 15 Tax Deadline appears to be diminished with numerous bullish days present on either side of the day. Traders and investors tend to be more focused on first quarter earnings and guidance during April. Exceptional Q1 earnings and positive surprises tend to be anticipated with stocks and the market moving up in advance of the announcements and consolidating or correcting afterwards.

Options expiration week frequently impacts the market positively in April and DJIA has the best track record since 1990, with an average gain of 1.3% for the week with just five declines in 28 years. The first trading day of expiration week has a slightly better record than expiration day and the week as a whole is generally marked by respectable gains across the board. The week after has a softer long term-record, but still has a bullish leaning record.

Good Friday (Passover and Easter) lands in April’s option expiration week this year. Historically the longer-term track record of Good Friday (page 88 of Stock Trader’s Almanac 2019) is bullish with notable average gains by DJIA, S&P 500 and NASDAQ on the trading day before. NASDAQ has advanced 17 of the last 18 days before Good Friday. Monday, the day after Easter has exactly the opposite record and is in the running for the worst day after of any holiday. Since 2004 the day after has improved. 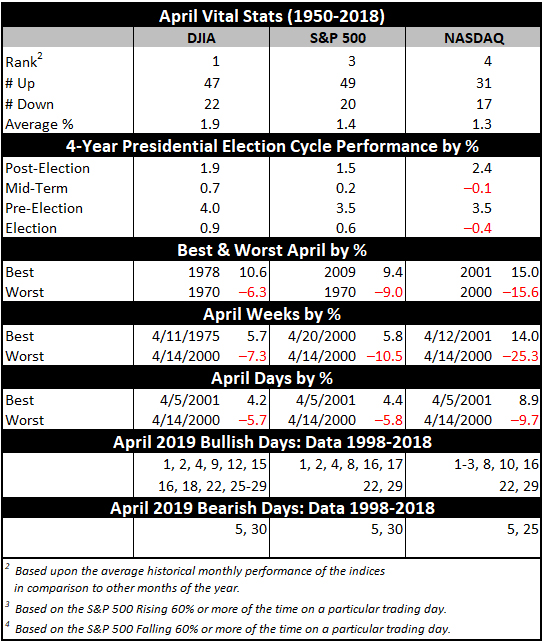